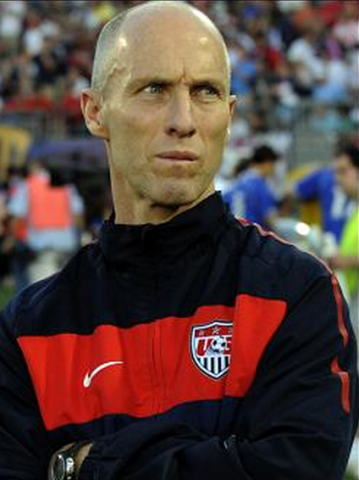 US national team football coach Bob Bradley, 52,  is hot-favourite to become the new manager of Aston Villa after Martin O’Neill’s resignation on Monday.

Known for his aggressive man-management style and motivational skills, Bradley achieved 36 wins in 60 games with the US national team, including a 2-0 win in the 2009 Confederations Cup against Spain.

His profile was further raised at the 2010 World Cup in South Africa when he secured a 1-1 draw against Fabio Capello’s England side and his team went through to the knock-out round as group winners.

The American, who has a degree in history from Princeton University, has had appointments at Major League Soccer clubs Chicago Fire, Metro Stars, and Chivas.

The likely appointment of Bradley comes on the back of reports Martin O’Neill had lost the Aston Villa dressing room, player’s text-messaging each other pictures of champagne bottles when they heard the news.

Under Martin O’Neill last season Aston Villa lost 7-1 away to Chelsea in the Premier League, were defeated in the Carling Cup by Manchester United and in an FA Cup semi-final to Chelsea.

That Bob Bradley will now have the responsibility for training, team selection and tactics, will give Americans total control at every level the football club following the £62.6m take-over by Randy Lerner in 2006.

To fans of the Villa lions Randy Lerner has so far proved to be a roaring success, but the handing over of team management to an American with no experience of top-flight European football will be seen as his biggest decision yet.