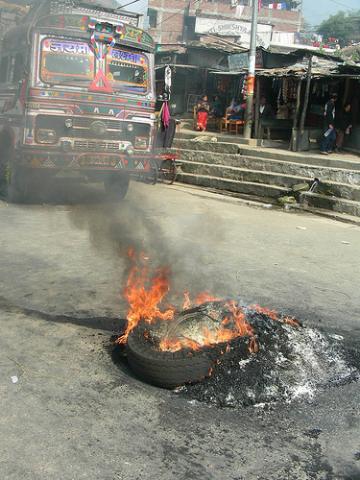 The newly appointed Secretary General J N Khanal yesterday publicly called upon his party workers and supporters all over Nepal to attack Maoist Party workers and supporters. National media have reported it. He was asking his party organizations to retaliate against Maoists who obtained 120 direct seats in the constituent assembly elections held on 10 April. The Nepali Congress and the UML obtained 73 and 70 direct seats in the same election. After the election, marked by all national and international poll observers as ‘excellent’ and ‘peaceful’, the two parties have adopted a neo-regressive path of dismantling the overall peace process.

After the Maoist party emerged as the largest party of Nepal through the 10-April constituent assembly poll, the Nepali Congress and the UML leaders have been demanding the dissolution of the Maoists’ youth wing, Young Communist League (YCL) as it helped the Maoists gain more seats than estimated by New Delhi and Washington.

The Nepali Congress and the UML have also presented their logic that Maoist leader, also the political supremo of the People’s Liberation Army (PLA), cannot be eligible for heading the coming government without first dissolving his party army.

Contrary to this claim of Nepal’s parties Nepali Congress and the UML, Maoist Chairman, who was elected from Kathmandu and Rolpa, has asked them not to forget the Comprehensive Peace Accord in which it is clearly stated that the PLA kept in the UN-monitored cantonments will be integrated into the national government army after the coming constitution decides a final settlement in the peace process.

Issuing his Nepal Report yesterday, the UN Secretary General Ban Ki Moon also reiterated that Nepal’s peace process now has to complete the three stages of forming a new government, implementing the republic as provisioned in the current interim constitution and managing the two armies finally. This statement of the UN Secretary General is in sharp contrast to the demand of the Nepali Congress and the UML, the two major coalition partners of Maoists at present.

Meanwhile, Maoist leader Prachanda has called upon all the Nepalis to take out to the streets on 28, 29 and 30 May to foil any counterrevolutionary and reactionary attempts aimed at disrupting the process of implementing the republic through the first sitting of the recently elected constituent assembly. He has asked people to come out and watch out against any counterrevolutionary attempts.