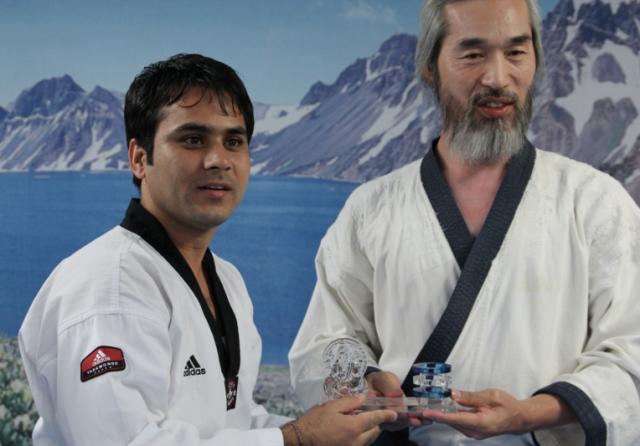 Atul went there with his two players Zaheer abbass from Kargil and Manpreet Singh Jammu. Both of players played well in the championship

After Finished the championship then he flew to to participate in World Taekwondo Federation & Kyunghee University Partnership Taekwondo Training programe for Taekwondo Coaches¬¬ from 26th September to 14th October , 2011. He had earlier completed the same course successfully in 2008 and on the basis of previous performance World Taekwondo Federation and gave another chance to  Pangotra . He got Scholarship to attend the course in 2011 based on his performance in the year 2008. All the expenses of Training and Boarding Lodging by WTF and KHU but Airfare he spent by his own pocket. During his course he visit various International Training Centres of Korea and trained under World class Coaches and got appreciation. Atul is first Indian those who get chance 2nd time for this prestigious course.

The training course is to keep International Coaches abreast with the advanced techniques being used to train International players. Atul is a commonwealth bronze medalist, National champion from 2008 to onwards and has participated in 3 world championships as a player. He is currently ranked one in . The experience gained from all his achievements has proved to be savior for the state Taekwondo team. The performance of team has improved manifolds in the last three years . The team was runner-up in 2008 National Taekwondo Poomsae championship and then ameliorated (bettered/enhanced) it by becoming champion in 2010.

He was welcomed by Harish kumar , President TFI and other office bearers at the when he returned after the successful completion of the course.

President Jammu & Kashmir Taekwondo Association P.C.Sharma and other office bearers congratulate Atul for his another achievement in the field of Taekwondo and hope that other players and coaches also do the same. P.C. Sharma gave Special Thanks to Minister of Sports  R.S. Chib B.A.Runiyal , Commisioner Secretary Technical Edu, Director Youth Services & Sports for permitted him to participate this event and Training course as Atul Pangotra is working in Department of Youth Services & Sports J&k Govt.