I made this prediction in July 1996 and it looks like it is going to be spot on.

There is a tidal wave coming in the world stock markets. It will easily be the biggest points-crash ever and it is going to occur by September, 2009. How do I know this? By spending years watching how the stock market indexes respond to the movements of the planets, especially at times of sudden, large movements.

The coming train-smash is heavily supported by both astrological and global economic factors.

Worldwide, housing prices have risen to near frightening levels. Most economically active people in the world are up to their eyes in debt. People own luxuries and properties that they can barely afford. America is in debt as a country. Most of the world is in debt, and we have just come through the greatest rise in the stock markets ever!

What is happening? The stage is being set for a massive wipeout in equities worldwide. The days of this supercycle peak that fund managers believe they can ride for much longer are numbered. People are going to wait too long and when the stampede begins, they won’t be able to find buyers for their stocks. Hedge fund strategies will fail. Absolute returns will fail. Pension funds will suffer.

Civil infrastructures will be tested to their limits against growing numbers of the poor as they migrate to richer countries. Companies will be going bankrupt by the dozen.

It is time you began to reflect on this possibility very seriously. It could be many years before the equity markets even begin to regain their current levels. If you do not have 5 to 10 years to spend waiting for your investments to recover, then the stock markets are definitely not the place you should be at the end of this decade.

The world stock and financial markets react very noticeably to the configurations of the Sun with the large, outer planets, especially Jupiter, Saturn, Uranus and Neptune. One merely has to correlate these aspects for a few years, using an Ephemeris, with a major index such as the Dow, to realise that this statement is true. Although Saturn/Uranus aspects show rough periods of the greatest fluctuations, I have found that, in particular, the diurnal aspects between the Sun and Jupiter are the best short-term indicators.

The markets generally experience growth leading into the trines, sextiles and conjunctions, and depress or even crash on the opposites (and occasionally the squares). I kept meticulous records of newspaper clippings of the world stock market movements during these "Sun/Jupiter" aspect dates between 1996 and 2001, and in almost every instance there was a noticeable general movement that was unmistakeably caused by their interaction.

(I have found that this technique holds a lot of merit when studying the Foreign Exchange markets. The Dollar price versus other currencies tends to follow the Dow Jones index. However, there is usually a lag or delayed reaction of about a week to a month or so.)

An interesting excercise is simply to follow the effects of the Sun/Jupiter opposition each year. There is usually a remarkably visible effect on all of the major world stock markets.

The overriding factors tend to follow that of traditional astrology. Several crashes have occurred when Jupiter opposes the Sun. The year in question is usually a ‘jittery’ year, as determined by Chinese astrology. These are mainly the years of the Cat, Rabbit and Rooster. In addition, the vacillating month of Libra (October) often adds to a bad configuration. The worst reactions occur in negative magnetic-pole (Yang) years, which are the odd years, for example, 1933, 1969, 1987, 1989, 2001, 2009…

Looking ahead, one of the next big crash dates could possibly be Black Friday, August 14, 2009. Here are the reasons, in order of importance. 1. Saturn within orb of opposing Uranus. 2. Lunar node in Aquarius (nadir of the down cycle – Louise McWhirter’s theory). 3. Sun opposing Jupiter and Neptune. 4. Mars squaring Uranus.

Please note: Although you can almost certainly expect the markets to seriously deflate around this date, it is likely that the stock markets will generally not be a good place to be later on in this decade, as the Lunar node moves towards its nadir in Aquarius. However, by knowing when your own transits (and progressions) are good, you can still make money in any market, by going short or long. It is well known that you can often make money a lot faster in a falling market if you purchase put options or bonds at the correct time. You can get a very good indication of these times by following the basic rules discussed on this page. Summarised, they are:-

1. Purchase stocks (or the Dollar – note it lags behind the Dow) as the Sun starts moving within a 10-degree orb of a beneficial Sun-Jupiter aspect (trine, sextile or conjunction).

2. Sell around the date of the good aspect if the outer-planet aspects (to the Sun) following the beneficial Sun-Jupiter aspect are predominantly bad. If they are mostly good, hold on to your shares until roughly the date of the next Sun-Jupiter square or opposion.

3. Sell the markets short leading into the dates of the Sun-Jupiter squares and oppositions. They usually depress around these dates, sometimes dropping on the exact or next day. This would have worked to the day for the recent selloff of February 27, 2007.

4. A good rule-of-thumb is to expect a reversal of some degree on most Sun-Jupiter aspects.

5. Follow your progressions and transits to confirm that you are making your move at a beneficial time. If you don’t have the time or interest to do this, simply use the Lucky Days program to time your actions. This alone will give you an excellent advantage, especially when used in conjunction with a good analytical or charting method.

2007 example of how the Sun-Jupiter aspects affect the Dow.
The 10 degrees (days) before the exact aspect are shown in color. 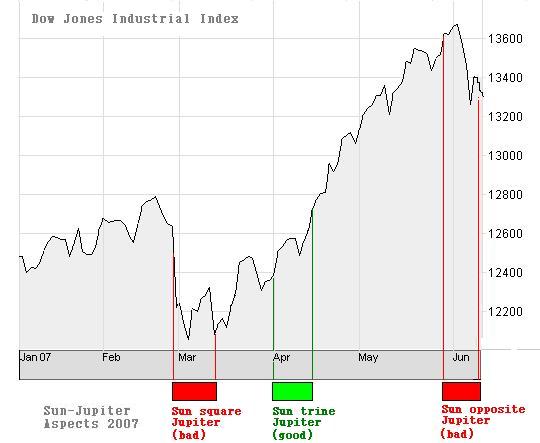 If you plot the major market indexes against the Sun-Jupiter aspects for the past decade or more, will see how they generally and unmistakably correlate.