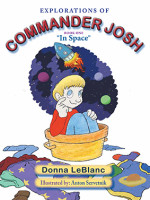 1888PressRelease – Explorations of Commander Josh, the first in a new series of children’s books by author Donna LeBlanc, shows young readers how they can enjoy learning by using their imagination.

NEW HARTFORD, Conn. – Children need an opportunity to explore using their own creativity away from their electronic devices. Celebrating that level of inquisitiveness is the goal of author Donna LeBlanc’s new book, Explorations of Commander Josh. While so many children spend time attached to electronics, LeBlanc took her inspiration from a young nephew who always was – and is – full of life, transforming him into her central character.

LeBlanc said, “It occurred to me that it would be entertaining to create a role model that could help children to have fun by being creative rather than relying on electronic distractions.” Filled with colorful illustrations, Explorations of Commander Josh is the first in a series of books planned and penned by LeBlanc. “My goal is to give children a positive, fun experience of how rewarding it can be to develop ways to make up their own adventures, just like Josh,” said LeBlanc.

The first book in the series, Explorations of Commander Josh, which is on sale now, will be followed up with other titles featuring the main character of Josh. This will allow readers who love Josh’s adventures to continue to enjoy his experiences in more than one book. Future books will include the same level of colorful illustration and Josh’s uncanny ability to move through situations in a fun and positive manner.

Before becoming an author, Donna LeBlanc studied music and musical theatre, became a wife, worked in corporate America, served as a mentor and as a children’s choir director, and created her own business in faux finishing and interior decorating. Her first efforts at writing began two decades ago when LeBlanc developed a short story about a boy who lived in a laundry basket. In 2009, LeBlanc picked up the idea again, creating the character of Josh while observing her nephew act out the characters he watched on TV.

Explorations of Commander Josh is ideal for parents who want a role model for their children, for libraries that are looking for the best books to share at story hour, and for elementary schools that share the value of imagination and encouraging creativity in their youngest students. Explorations of Commander Josh can be purchased online from SDP Publishing Solutions, Amazon or Barnes and Noble.

About the Author
As a piano instructor for the past two decades, Donna LeBlanc has been inspired by the relationships she has built. When she is not teaching her students and finding new destinations for Commander Josh, Donna is managing her decorating business, mentoring at a local elementary school, and serving as an executive board member on the town’s business council. Donna currently resides in New Hartford, Connecticut, with her husband, her brother and two dog daughters, Sophie and Rosa.