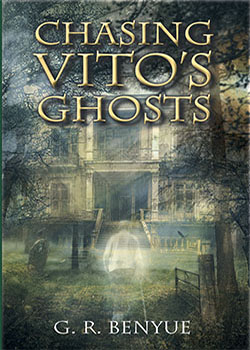 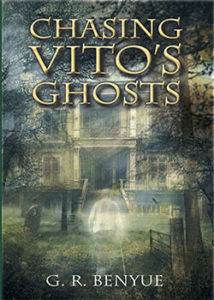 1888PressRelease – Author Gina Benyue’s new book, Chasing Vito’s Ghosts, is filled with layers of suspense as characters are faced with ghosts, visions and past life events as they attempt to solve a recent murder that won’t let a ghost rest in peace.

East Bridgewater, Mass.- The intersection of the present and the past can cause trouble even on the best days, especially when it is a painful past. Author Gina Benyue’s book, Chasing Vito’s Ghosts, explores how the pain of the past and the present can collide and create chaos for everyone involved.

As an author, Benyue has the uncanny ability to combine the suspense of a murder case with ghosts and visions. “I have always been fascinated by the way that crimes are solved, as well as with haunted houses and ghosts,” said Benyue. “Chasing Vito’s Ghosts is my way of combining my interests and exploring what would happen if they were used to get answers that no one else could get.”

The book is centered on the main character, Becka Brandt, and her rare skill to see the dead. After her fiancé and colleagues are killed in an explosion, Brandt retreats to a small suburb in Massachusetts to heal. Instead of finding the peace that she so desperately needs, she ends up living in a home that is haunted by Vito, the ghost of a murder victim. This coincidence puts Becka on the road to not only healing from the loss that she has faced, but helping Vito to solve the mystery of why he was murdered and by whom.

Benyue has been writing her entire life, finding a passion for the craft as a child. Born in Sioux City, Iowa, Benyue has spent the majority of her life living near Boston. “I have developed a real love for the people and places of Massachusetts,” said Benyue. “That is why I chose the Boston area as the setting for my book. I am passionate about the people and the stories that are a result of the history of the area.” This passion is what has driven the careful plotting and writing of the book.

Readers will love the suspense that Benyue infuses into every single page of her book. Chasing Vito’s Ghosts can be purchased online now from SDP Publishing, Amazon or Barnes and Noble.

About the Author
G. R. BENYUE has been writing since she was a child, when she would write poems on the inside flaps of brown paper bag book covers. Born in Sioux City, Iowa, G. R. moved with her family to Massachusetts in 1972, when she was thirteen years old. She graduated from Newman Prep High School in Boston in 1976 and attended Boston Business School. Although she loved her work as an accountant, her urge to write remained strong. When her youngest son was born in 2004, she returned to her love of writing by creating short stories to read to him. She recently retired from her position at Public Consulting Group, Inc., in order to pursue writing full time. Her familiarity with and fondness for Boston and its surrounding areas-the rich and beautiful atmosphere and history-provided the inspiration for her first novel, Chasing Vito’s Ghosts. She lives with her husband, Normand, and her son, Michael, along with their cat, Brock; Golden-doodle, Boomer; and seven African water frogs, in East Bridgewater, Massachusetts.