Gilgit-Baltistan Chief Minister Syed Mehdi Shah has invited Pakistani cricketer Shoaib Malik and tennis ace Sania Mirza’s by extending an invitation to the couple to spend their honeymoon in the province despite the uncertainties hovering over the Shoaib-Sania wedding. Gilgit-Baltistan is a part of the undivided state of Jammu and Kashmir and the Pakistani authorities […] 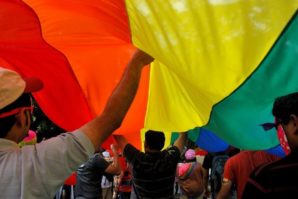 At last, Delhi’s High Court has legalized homosexuality.  The court has ruled that homosexual intercourse between consenting adults is not a criminal act. The ruling overturns a 148-year-old colonial law which describes a same-sex relationship as an "unnatural offence."  The court said that a statute in Section 377 of the Indian Penal Code, which defines […]

About 4 lakh officers of central public sector enterprises will benefit from a government decision giving them a further increase in salary and allowances, over and above the hikes announced last year. The improved pay packages includes increase in house rent allowance and retirement benefits.   The decision to improve the salary structure of […]

Eleven serial blasts  rocked several districts of Assam today, including four in Guwahati, killing at least seven persons and injuring over 50 others. Several of the injured were said to be in a critical condition Thick black smoke billowed into the sky as the blasts in Guwahati targeted busy markets like Fancy Bazar, Pan Bazar […]

The controversial Catholic Bishop Dr. John Thattunkal, who has become butt of criticism for adopting a 26 year old woman, has been suspended from Kochi Arch Bishop position by Pope Benedict XVI. Varappuzha Archbishop Dr Daniel Acharuparampil has been assigned the duty of Kochi Diocese.   This is the first time in the history of […]