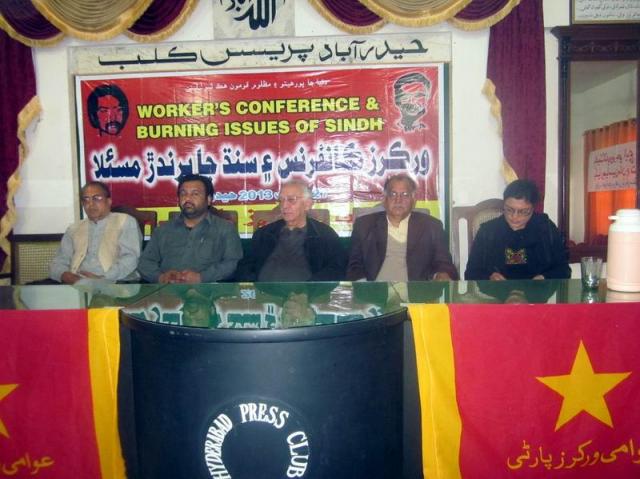 Hyderabad, 27th January 2013 – The Awami Workers Party (AWP) held its first workers conference at the Hyderabad Press Club on Sunday in the presence of the party’s central leadership. Hundreds of party workers from almost all districts of the province remained in attendance throughout the day, joined by members of the press and activists of other progressive parties during the open session in the afternoon.

They emphasized the importance of the AWP’s formation in a steadily fragmenting political environment where violence has become commonplace and state-sponsored repression against oppressed nations, minority sects and non-Muslims, and the mass of working people has reached acute proportions. In addition imperialist powers have encircled the wider region of south-west Asia both through military interventions and in the form of a ruthless struggle for control over the economic resources upon which the toiling classes depend.

The party leadership stressed that the situation in Sindh is particularly alarming. Karachi is engulfed in a virtual civil-war and mainstream parties are conspiring to foment divisions across ethnic groups which are giving further impetus to racist attitudes that have been championed by political forces that declare themselves defenders of Sindh. In such a situation only a united and well-organised leftist party is capable of bringing together working people across all ethnic, sectarian and other divisions and spearheading the democratic, anti-imperialist and secular struggle towards the building of a genuinely multinational and socialist Pakistan.

On this occasion the party issued resolutions demanding the reinstatement of the FIR against the owners of Ali Enterprises who were responsible for the murder of 300 workers; replacement of the discriminatory and two-tiered SLGPA with a transparent and equitable local government system; an end to the barbaric kidnappings, torture and killings of progressive political activists in Sindh and Balochistan; an end to the systematic discrimination against non-Muslims including the forced marriages of Hindu girls; and the restructuring of the existing irrigation water system in favour of small and landless farmers.

The conference focused on both the party’s organizational and ideological tasks in Sindh, as well as the major political issues faced by Sindh’s working people. The party leadership stressed that the primary objective over the next few months is to build the party’s organizational structure, focusing on inducting workers, peasants, students, and women into the fold. Accordingly the party will participate in upcoming general elections only in a handful of selected constituencies.