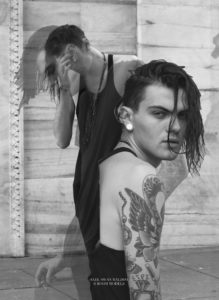 Axel Swan Maldini, a multi-talented, U.K. born and raised model, teamed up with photographer Kevin Pineda for the incredibly successful The Fashionisto editorial, “Boys of Milan.”

Pineda is an Italian photographer known for his black and white fashion, architecture and sculptural photography. Pineda’s work has appeared in many prominent fashion websites and publications, and various campaigns for prestigious fashion brands including Hunger Magazine, Tom REBL, L’Officiel Hommes, Lampoon Magazine, Carbon Copy Magazine and Spindle Magazine, among others.

With the shoot’s focus set on Milan, Pineda captured each of his models in a distinct method, resulting in a gorgeous black and white series. Maldini was featured throughout the editorial alongside other highly prominent international models.

“The editorial was a glowing success,” Pineda said. “Mr. Maldini’s broodingly dangerous appearances and seemingly jaded composure provided ample contrast to that of other models. The black and white portraiture captured an array of different looks and attitudes from the streets of Milan, and Mr. Maldini’s presence and aesthetic made the difference.”

Maldini donned high-end clothes for the project, representing brands including Rick Owens and Acne. When it came to the process as a whole, from the notable fashion involved to the shoot itself, Maldini said, “From the makeup, to the lighting, to the styling, everything was perfectly executed. Lighting matched the mood and put the clothes in their perfect context.”

The success of “Boys of Milan” was celebrated by a second iteration of the shoot titled “Boys of Milan II.” “Mr. Maldini was additionally featured throughout the editorial for “Boys of Milan II,” a distinction that further evidences Mr. Maldini’s standing presence as a model of high demand,” Pineda said.

Said Maldini, “When I found out there was going to be a second editorial of Boys of Milan, I got really close to the photographer and now friend Kevin Pineda. I was definitely extremely enthusiastic of getting to spend another creative day with someone more than familiar and a few other friends that have been included in the shoot too. Fashionisto is one of the well-known websites for fashion, and being on it gave me the chance of having even more visibility, especially being next to some other really successful models.”

Much of his success encompasses various campaigns including Cult Shoes and Catherinelle Bags, paired with appearances in the Evin Beachwear, Hells Bells Jeans, and Kon Streatwear look books.

As noted by Pineda, these accomplishments, “Reflect a deep understanding of both the fashion industry and of his strengths as a model. I personally vouch for Mr. Maldini as among the top tier of models, and as an asset to my own work as well.”