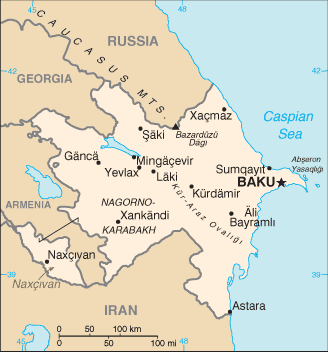 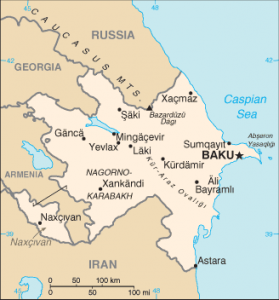 Seen from Azerbaijan, the mass protests in Turkey have evoked particularly strong feelings, and have promptied some to wonder whether the same kind of thing might be possible in their own country.

There are obvious parallels – the two countries are bound together by old cultural and linguistic ties, and more recently a political alliance. Turkish prime minister Recep Tayyip Erdoğan is seen as increasingly autocratic by his opponents, while Azerbaijan’s President Ilham Aliyev looks set to stay in power indefinitely.

For young Azerbaijanis opposed to Aliyev, events in Istanbul have inspired feelings of excitement and envy. Previously, they observed the protest movements in Iran in 2009, in Russia in 2011, and in Georgia last year, and wondered whether something similar was possible in Azerbaijan .

“Since there is no opportunity for political activity, any political event in a neighbouring country excites Azerbaijanis,” Arastan Orujlu, head of the East-West Research Centre in Baku, said.

The impact of the Turkish demonstrations has been more immediate, partly because of the cultural kinship and partly because of this autumn’s presidential election in Azerbaijan, in which opposition groups hope to put up more of a challenge than before.

Facebook users in Azerbaijan shared news stories, photos and videos of the protests, which began over plans to redevelop the Gezi Park but expanded to include concerns about freedom of expression and the trend towards Islamicisation.

There are many Azerbaijanis living in Istanbul for work or study, and some of them went to the protests to add their own messages on banners saying, “Baku is with you, Gezi”, and “Aliyev, it’s your turn now”.

Anar Mammadli, head of the Election Monitoring and Democracy Studies Centre in Baku, was on a two-day visit to Turkey when the Gezi Part protest started. He prolonged his visit to take part.

He admits he felt somewhat jealous when he saw how well-organised the demonstrations were in comparison with his own country.

“That’s because there’s silence, there’s no political creativity or dynamism in Azerbaijan,” he said. “We don’t have masses of people coming together… [we have] protests by small minority groups. Even last winter’s protests against soldier’s deaths – a nationwide concern rather than a political issue – failed to bring different subcultures together.” (See Azeri Anger Roused by Soldier’s Death for the background to that issue.)

Javid Agha, who is studying at an Istanbul university and joined the protests as a show of solidarity, expressed similar doubts about whether this kind of mass action could happen in Azerbaijan.

“Protests in Azerbaijan are more like party meetings than people gathering to protest. Azerbaijani protestors are not apolitical; they belong to political parties. I am keener on apolitical protests where there isn’t a political interest, as in the recent Turkish protests,” the student said.

President Aliyev succeeded his father Heydar Aliyev as president in 2003, and looks almost certain to win re-election this October. International human rights groups have accused him of jailing his political opponents, although at a press conference in Brussels on June 21, he denied that any of them were in prison.

The main opposition parties in Azerbaijan – the Popular Front and Musavat – and a number of non-government organisations joined together at the end of May to form a National Council to coordinate their activities.

Speaking at an event on June 7, Popular Front leader Ali Kerimli pleaded with people to come out and back the National Council.

“We need the support of a large body of people. We need them to be there with us when we protest and when we send messages,” he said.

Orujlu was not optimistic that large numbers of people would coalesce around the political opposition. Excitement about protests in other countries did not translate into street action, he said.

“People in Azerbaijan don’t trust any political power. I am sceptical that either the opposition or the ruling group has a popular support base,” Orujlu said. “They need to win their trust. That hasn’t happened yet. It is therefore hard to say there will be protests of any kind before the presidential elections.”

Kerimli denied that the lack of political activity was due to apathy. Instead, he blamed government repression.

“In the current authoritarian system, civil society cannot be active. So if Azerbaijanis don’t express themselves as freely as people in Turkey and European countries, it’s entirely because they can’t. How can they, if they are being arrested inside their own homes for their political views?” he asked.

Shahla Sultanova is a freelance journalist in Azerbaijan.