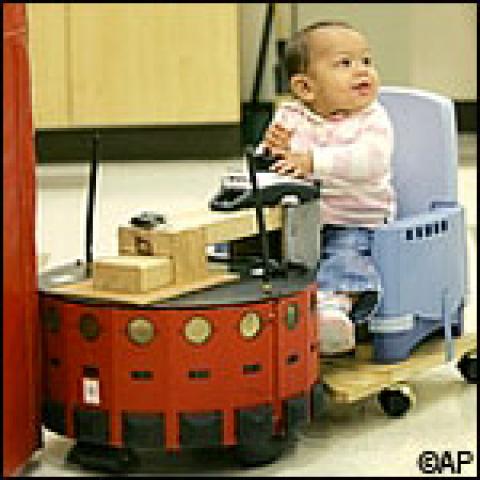 With a 6-month-old at the controls, researchers at the University of Delaware are encouraging underage driving.

Their ultimate goal is to help immobile, disabled children move and explore.

The researchers are using robotics in an odd contraption that’s sort of a cross between a bumper car and a robot. In a recent test, Aniya Harris, a normally developing 6-month-old, scooted across the floor in delight by pushing a joystick on the little vehicle. She’s too young to steer it.

He and the other researchers believe the robot, dubbed UD1, holds the promise of opening up new horizons for disabled infants, especially those with orthopedic problems or muscular dystrophy. Wheeled robots could enable them to move and explore the world around them, which studies suggest is critical to their development.

Researchers in the United Kingdom have been working for years on powered mobility for toddlers. However, Galloway said, conventional wisdom has held that because of safety issues, children aren’t considered ready for that until age 4 or 5; the earliest age doctors might recommend powered mobility is age 3.

That means too many children are at risk of losing out on the important early link between mobility and their overall development, he said.

Sunil Agrawal, a professor of mechanical engineering at the university, has been working for years on wheeled robots with infrared and sonar sensors that can avoid obstacles. A prototype based on those models is being used in studies involving about a dozen typically developing infants and a smaller number who have special needs.-AP