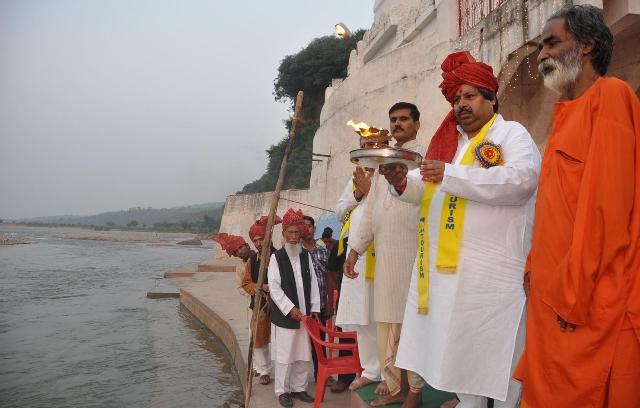 , October 4 (Scoop News) – Minister for Revenue, Relief and Rehabilitation . Raman Bhalla has said Government is taking up several steps to develop Bahu Fort area, which is one of the fast emerging pilgrims destination in the State by providing modern lines way side facilities to the visitors.

This was stated by the Minister while interacting with pilgrims at Harki Podi, Bahu Fort Jammu here today.

For boosting tourism in Bahu Fort area, the Minister said that Government has created modern line wayside facilities for pilgrims and tourists in the area like recreational garden, aquarium, balidan stumb, landscaping, view points, tug shop, toilet blocks, fencing, illumination, drinking water besides construction of darshani deodi near Kalika colony adding the place would become a major attraction for those visiting Shri Mata Vaishno Devi ji and other tourist spots of the State. He said the pilgrims of Shri Mata Vaishno Devi Ji have firstly come to at Bahu Fort for darshan from across the country.

In order to attract domestic and foreign tourists towards city of temples, the Minister said that focused attention is being paid for developing all the open spaces as recreational parks besides creating other necessary facilities. He said that a number of measures are being  taken to develop new tourism spots and conserve century old monuments of the region like Mubarak Mandi and in Bahu Fort.

. Bhalla said Government has sanctioned Rs. 3.5 crore for developing the river Tawi embankments near Peer Khoo temple which include construction of parks, Tourist Reception Centre, artificial lake adding that Rs. 90 lakh have been kept for construction of view points and road widening from Bahu Fort to Harki Poudi temple.

The Minister said that with the creation of high standard tourism infrastructure at various potential places, region is fast emerging as an independent attractive destination. He informed that the work on ambitious cable car project proposed to connect twin heritage sites of Royal Complex Mubarak Mandi and Bahu Fort would be started soon. He said that the tenders for the works have already been floated and the process of allotment of works was likely to start soon.

Referring to measures being taken for promoting tourism in other parts of the region, he said the government is looking forward to introduce water sports at Akhnoor, Baglihar and Pul Doda.

The Minister informed that Government has earmarked Rs. 1.72 crore for construction of Revenue Complex Bahu at Channi Rama adding that the complex would be constructed on 5676.80 sft area on modern lines with facilities of meeting hall, Tehsildar, Niab Tehsildar offices, Deputy Commissioner Secretariat, Waiting Hall Guest House and Conference hall with toilet blocks. He said with the completion of the complex, the revenue related problems of 4-lakh populace of Channi Rama, Transport Nagar, Narwal and Bahu Fort and its adjoining areas would be solved under one roof.

On the occasion, the artists of Bhartiya Lok Sangeet Kala Sanstha also presented devotional songs which were high applauded by hundreds of pilgrims gathered on the bank of river Tawi.