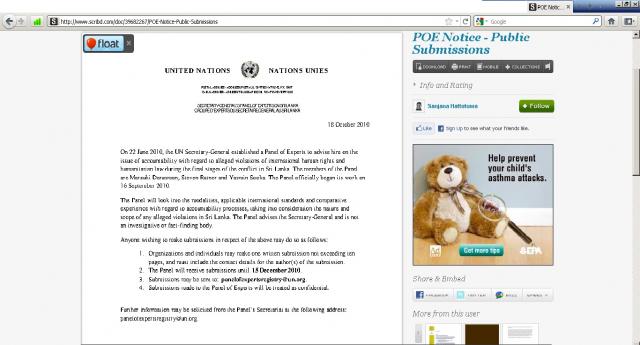 An analysis of notices published by the UN Panel of Experts (POE) calling for submissions and email correspondence this writer has had with the Panel show that the Panel has effectively denied the citizens of Sri Lanka an opportunity to be heard by the Panel.

The POE has surreptitiously given more time for detractors of the Government of Sri Lanka (GOSL) by publishing on scribd.com a notice calling for submissions which few were aware of.  Even an emailed reply to those who enquired less than two weeks before the end December 2010 deadline, did not mention the impending deadline although it had been extended for reasons best known to the POE.

They have in this manner systematically favoured the receipt of submissions against the Government of Sri Lanka (GOSL).

Compelling evidence demands that the UN Secretary General Ban Ki-moon should officially reject the Report of the Panel of Experts (POE) on Sri Lanka for not adhering to accepted norms of objectivity, transparency and accountability.

It was in 1952 that the UN began its work in Sri Lanka, three years before the country was formally admitted as a member state of the world body. Despite having been in the country for sixty years, the UN did not see it fit to publish in the local media, its call for submissions. An enquiry directed to the UN offices in Sri Lanka by this writer via their website asking whether the UN in Sri Lanka was involved in publishing any notices in the local media on behalf of the POE calling for submissions from Sri Lankans, remains unanswered.

According to a recent report by Nielsen Sri Lanka, internet users in Sri Lanka represent only 14 percent of the population. Despite huge advances in recent years, the use of traditional media is a must for effective mass communications in Sri Lanka.

The UN has thus effectively denied the citizens of Sri Lanka the opportunity to be heard before the Panel. Yet, the recommendations have been recycled by interested parties clothing the so-called “credible allegations” in a veneer of respectability, to the point of becoming indictments against the GOSL. These allegations are made without a shred of evidence and no recourse to the legal system of Sri Lanka.

The UN Panel of Experts (POE) Report on Sri Lanka should have been a clear-cut document that embodied facts with substantiating evidence based on international norms and best practices and some clear recommendations based on its terms of reference, for the UN Secretary General to act upon. Instead, it has stirred controversy and been widely condemned in Sri Lanka, by the very people whom it was intended to benefit.

That this report could have far reaching implications for Sri Lanka need hardly be said. The wider implication however, is that it could prove a precedent for all member countries of the United Nations.

That precisely is the reason that the UN Panel of Experts Report on Sri Lanka should be subject to exacting standards of accountability; and it is there that it fails.

The Panel has failed to adopt a methodology by which they could arrive at impartial conclusions and has created a serious doubt as to whether it was pursuing an agenda designed to indict Sri Lanka for ‘war crimes’.

Flaws show up in Email Response

It was on October 18, 2010 that the POE invited submissions with a deadline of December 15, 2010. However, this notice was not published on the UN website. Having found the notice posted on Scribd.com via a search on the internet, this writer sent an email on October 21, 2010 seeking further information. Since no reply was received, a reminder was sent to the POE on November 21, 2010.

On December 18, 2010 the following reply was received:

Thank you for writing to the Secretary-General’s Panel of Experts. The Panel appreciates the time you have taken to your share your contribution with it.

The Panel is unable to reply to each individual given the volume of messages received.

The responses to a number of frequently asked questions are thus set out below.

Q.: Can I write in Sinhala or Tamil?

A.: Yes, though English, being the Panel’s working language, is preferred.

Q.: Is my submission confidential?

A.: Yes, your submission will be treated as confidential. Neither your name nor identifying particulars will be specified in the Panel’s report.

Q.: When will the Panel make its report?

A.: The Panel anticipates submitting its report in January 2011.

Q.: Will the Panel’s report be made public?

A.: The report is to the United Nations Secretary-General. He will decide whether to make the report public.

Q.: Can I speak to the Panel in person?

A.: The Panel has a limited time for its work and has therefore chosen to request contributions in the written form detailed in the notice.

Q.: Can I make multiple submissions?

A.: You are requested to raise all issues you wish to raise within the one, single submission.

Q:  Can I send my submission in hard copy to a physical address?

A.: Yes. You may send materials to the following address within the timeframe set out in the notice:

Q:  Can I submit non-written materials, such as photographs and film clips?

A.:  Yes. Please enclose such materials as attachments to your email or mail them to the above address.

Thank you again for taking this opportunity to be in contact with the Panel.

Secretariat of the Panel of Experts

Significantly, the POE did not mention the new deadline in the reply. The change of deadline was reflected in an amended notice published on scribd.com which was sourced through an internet search. It is this amended notice that has since been posted on the UN website where the filename identifies it as revision 1. (Note the revised filename.)

In the run up to the initial December 15 deadline, Inner City Press asked Haq and his office about bounced e-mails and Federal Express overnight packages of evidence which the Panel refused or could not receive. Haq said that he thought an extension would be announced — but then did not announce one.

On December 20, having received more complaints about packages refused by the Panel, Inner City Press again asked Haq about the projected extension. Staring down at note, Haq said it is extended to the end of the year. (Emphasis mine.)

An obvious lack of transparency on the part of the UN can be observed. That this writer received a reply in December just two weeks prior to the deadline which was not mentioned in the mail, and nearly two months after the initial enquiry, suggests deliberate action on the part of the UN POE. The contents of the report suggest that the Panel was selective in its collection of submissions and wished to deny submissions from affected persons in Sri Lanka.

The results of a flawed methodology should not be used to tarnish the reputation or cause harm to Sri Lanka as a member state of the United Nations.

Analyses of the POE Report by an Eminent Sri Lankan

Godfrey Gunatilleke, Chairman Emeritus and Senior Advisor of the Marga Institute (a leading development studies think-tank in Sri Lanka) has aptly deconstructed the UN POE Report and its criticisms into three key areas that warrant analysis.

Firstly, although the Panelists must have impeccable credentials, Gunatilleke has shown how they do not qualify. As he points out, all three of them have either personally held or belonged to organisations which held, views critical of the Government of Sri Lanka (GOSL) thus making them less likely to come to objective or impartial conclusions with regard to the GOSL. As Gunatlilleke outlines further:

“One set of responses to the report which seeks to reject it outright deals with issues concerning the appointment and status of the panel, the mandate given to the Panel and the way the Panel has interpreted it, the composition of the Panel and the capacity of the panel to arrive at fair and impartial conclusions particularly regarding the actions of the Sri Lankan Army (SLA) and the Government of Sri Lanka (G0SL).  Many of these criticisms question the bona fides of the initiative taken by the UNSG.

A second category of responses deal with more substantive issues relating to the central part of the report – the issues of accountability and the case made against the government in particular. These issues relate to the methodology the panel has adopted, its transparency, the sources it has been able to access, its account of the last stages of the war based on these sources, the framework of accountability it has adopted and the conclusions it reaches.

A  third  category  focuses  on  the  parts  of  the  report  which  deal  directly  with  the  process  of domestic accountability and the Panel’s recommendation for improving that process.”

Panel Has Exceeded the Mandate

In para 51 of the Report the Panel states:

“While the Panel’s mandate precludes fact-finding or investigation, the Panel believed it essential to assess whether the allegations that are in the public domain are sufficiently credible to warrant further investigations. Determining the scope and nature of these allegations allows the Panel to properly frame the accountability issues, which arise from them. The Panel has determined an allegation to be credible if there is a reasonable basis to believe that the