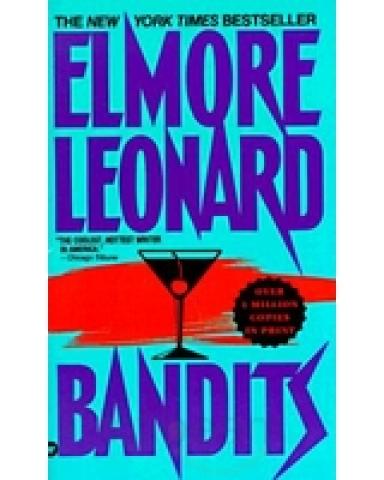 Bandits is a crisp, expansive American novel, set in New Orleans. It was written in 1987 by Elmore Leonard, the greatest living American writer. (The greatest poet is Amiri Baraka.) The title, simple like all of Leonard’s titles, compresses many of the ideas in the book. A bandit is a criminal, but a romantic, mythic one. He (or she) dares the law, rather than breaks it. And notice the word is plural — we are emphasizing many bandits, not merely a single robber. But don’t worry, I won’t divulge the plot of this addictive book. I’ll just talk about the first page. The first chapter is entitled "One." (The last chapter is "Twenty-Eight.") In the first sentence, we meet Jack Delaney, who works with his brother-in-law in a funeral home.

Leo wore latex gloves and a plastic-coated disposable apron over his vest, shirt, and tie.

That’s the last sentence on the first page. Leo is the brother-in-law. The image of Leo swathed in plastic is both literal and suggestive. And it’s funny his name is Leo. Like a lion-nurse, for the dead.

Leo is dressed in an apron because someone has died — a guy. Already, on the first page (which is actually number 1), already a death has occurred. Bandits begins in mourning, or rather in the modern American equivalent of mourning — a man at work over a corpse, pretending he’s washing a car.

Leonard learned from Mark Twain to write a book as if he’s talking:

Every time they got a call from the leper hospital to pick up a body Jack Delaney would feel himself coming down with the flu or something.

That’s the actual first line. It sounds like a guy who’s had two beers, sitting in a bar.

Elmore Leonard has the minimalist touch. Bandits is 369 pages, but it’s a book of short sentences. Sentences like:

"You want me to tell you exactly?"

That’s Leo, towards the bottom of the first page. (Maybe that’s a secret message from Elmore Leonard, because he is going to tell us exactly.)