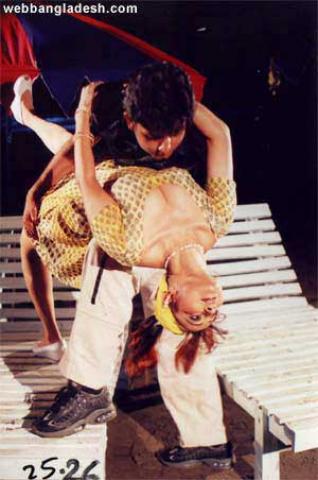 I am Mohammad Saiful Islam and the main purpose of writing this report is to focus the present condition of film industry of Bangladesh. I have a monotonous and acrid experience of watching Bengali films as a viewer. Let’s give attention to the following episode.   A beautiful heroine is running. Some villains chase at full speed with knife behind her. She tumbles down on a good place at a time. Villains catch her. Hero of the film comes down from the sky to protect the heroine as a traditional scene of Bengali film. He protects the heroine from the villains after an unbelievable fight and hospitalizes her to be cure.   Nodi, the sister of the victim heroine, write about the notorious activities of the villains to her newspaper as a bravo journalist. The villains are excited for revenge to Nodi. They go to the office of Nodi. The leader of the villains tells Nodi, “You write our news in a newspaper and I will write your news on your figure”. He pulls the shirtwaist of the heroine in opposite directions with other villains. Villains are not known that the hero of the heroine is a police. He protects the heroine after the completion of opening out the shirtwaist of heroine by villains. He throws the villains in the custody.   After some days, the police hero goes to the home of Nodi to meet with her. Nodi take tea and biscuits for the gentleman. Nodi pour outs the tea in the cup remaining straight but the gentleman was looking to the inside of the shirtwaist from the blank space of shirtwaist. He feels very happy and proposes to the heroine for loving.   At the end of the film, police force comes after a great fight between heroes and villains. All the time police force comes after the fights in Bengali films to arrest villains.   We are accustomed to watch this type of film again and again. So, we want something different from our film industry which is positive and educative.