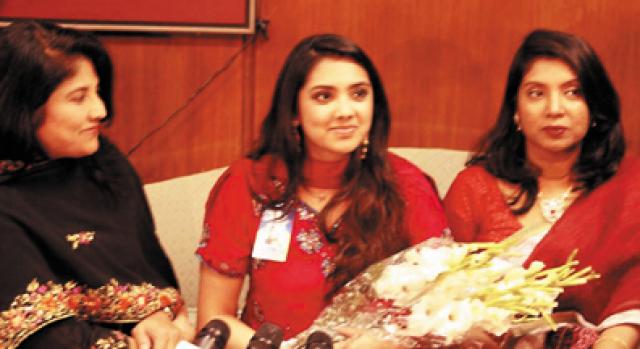 Bangladesh origin ‘Junior Miss America’ Nora Ali arrived Dhaka at the invitation of Kachi Kanther Asar to stand by the deprived children and help them educate.

She is the daughter of Zaki and Mahfuza Ali and attended South St. Paul High School in Mendonta Heights.

Nora, 18, was awarded the title of Junior Miss America 2007 at the 50th Annual America’s Junior Miss National Finals on June 30 in Mobile, Alabama.

She received a $50,000 cash scholarship, in addition to the $4,000 in scholarships that she won in scholastics, talent, self-expression, and interview during the preliminary competition.

On arrival here, Nora visited the National Mausoleum in Savar at about 11:45am and placed wreath at the altar paying tributes to the liberation war martyrs.

Although she was born in USA, Nora feels Bangladesh as her home and expressed her determination to work for poor children in this country.

"I always remember about my motherland Bangladesh. I’m proud of the War of Independence and I want expatriate Bangladeshis would do better in their respective fields," Nora Ali said.

She urged juveniles and children to come forward in helping the children in the cyclone Sidr devastated areas of the country.

Nora said she has been mobilizing funds for the Sidr affected children of Bangladesh in the US.

Nora said she planned to attend Harvard in the Fall to prepare for a career in Business Management or Finance.

Apart from Nora’s family members, Adviser of Kanchi Kanther Asar in the United States Ferdous Chowdhury and director Rizu Ahmed were present. Nora is scheduled to join a programme of Kanchi-Kanther Asar at Hotel Radisson in the city on December 28.