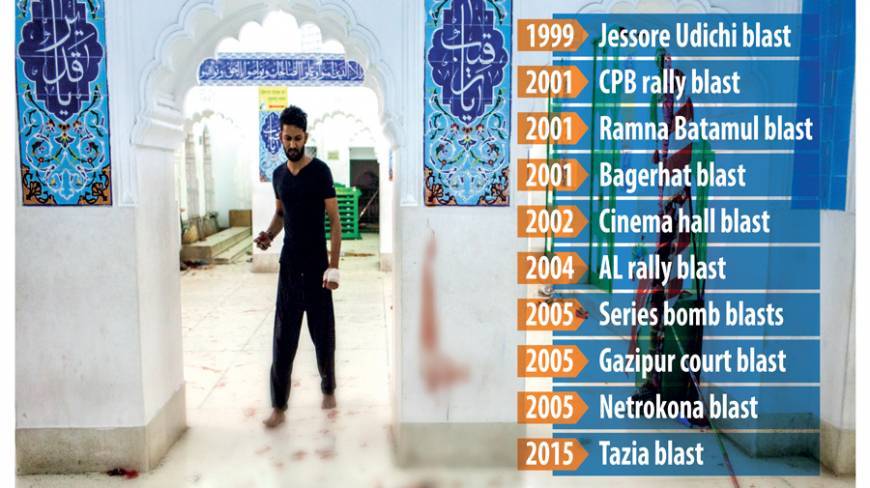 The fatal attack at Hussaini Dalan with handmade grenades on October 24 that to date has killed two people who joined the traditional Tazia procession of the Shia Muslims was the first such mass targeted terrorist operation by militants since 2005.

Upon preliminary investigation, the law enforcers said that Jamaat-e-Islami’s radical student wing Islami Chhatra Shibir was behind the attack, that was meant to destabilise the country’s law and order ahead of the execution of top Jamaat leader Ali Ahsan Mohammad Mujahid.

On December 8, 2005, at least eight people were killed and 40 others injured when the members of banned militant outfit Jama’atul Mujahideen Bangladesh (JMB) launched suicide bomb attacks on the offices of cultural organisations Udichi and Shata Dal Shilpi Goshthi in Netrakona town.

Since then, the militant groups, who aim at establishing Islamic rule in the country, did not carry out any organised mass attack until the one at Hussaini Dalan. Observers say it is the first reported attack on the Shias in Bangladesh where attacks on Ahmadiyyas and other non-Muslim groups is rampant. At least 130 people have been killed in mass attacks since 1999.

Of course, the targeted killing of individuals – mainly secular writers and Islamic scholars – did not stop. At least a dozen secularists and war crimes trial activists, and 13 religious scholars were killed and many other injured in attacks by radical Islamists during this period.

2005 was the most eventful year until now for terror. That year, the militant groups carried out five attacks, killing at least 25 people and injuring scores of others.

On January 5, 2005, former finance minister Shah AMS Kibria and four other Awami League leaders and activists were killed and over 70 others injured when militants linked to Harkat-ul Jihad al-Islami Bangladesh (HujiB) launched a grenade attack. Kibria was returning to Dhaka after addressing a rally in Habiganj’s Baidyerbazar.

HujiB was declared outlawed on October 17 the same year.

Then BNP-Jamaat government, which had repeatedly denied the existence of militant groups in the country, eventually banned JMB and its wing Jagrata Muslim Janata Bangladesh (JMJB) on February 23, 2005. Reports say another BNP ally Islami Oikya Jote also aided the militants during 2001-2006.

Before that, according to media reports, JMJB chief Bangla Bhai and his men killed at least 24 people and tortured some 300 others in Rajshahi region between April 2004 and January 2005.

Six months after the ban was enforced, the JMB on August 17, 2005 carried out simultaneous blasts at 511 places in 63 districts, killing two persons and injuring many others in an apparent show of strength.

The last militant attack of 2005 was fatal. Eight people were killed when JMB men blasted bombs at the offices of Udichi and Shata Dal Shilpi Goshthi in Netrakona town.

BNP chief and then premier Khaleda Zia in August 2004 said that there was no Bangla Bhai. On March 15 the following year she alleged that militancy was a propaganda hatched by the Awami League, then opposition in parliament.

She softened her stance in November and, admitting the existence of militants, asked the people to stop religious extremism.