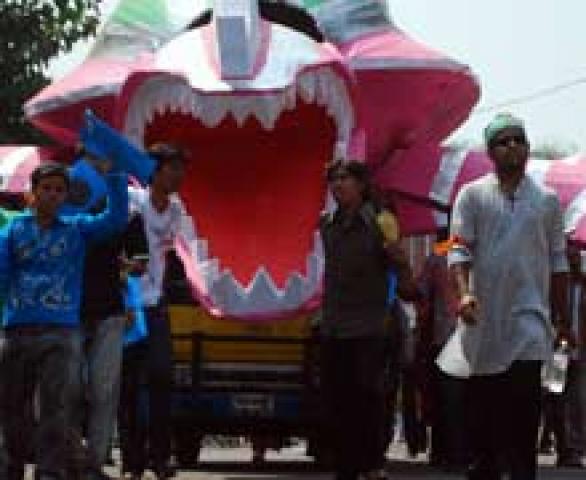 The whole nation on Tuesday saluted Pahela Boishakh, the first day of Bangla New Year 1416, with colorful festivities and a promise to sustain its cultural heritage. The day was a public holiday.
The whole nation celebrated this day with their family members, relatives & friends. Mughal Emperor Akbar introduced the Bangla New Year to facilitate his tax collection. After that traditionally, traders and shopkeepers open Halkhata (ending the account) on this day and offer sweets to their customers.
People from all culture, religions and age, dressed in traditional dresses, crowded Boishakhi Melas (fairs) where showcasing various handicrafts and artifacts of Bengali culture, in the capital and elsewhere in the country.
Colourful rallies, musical programmes, fairs and cake festivals added more color to the day. Chhayanaut was arrange cultural program at morning at Ramna botomul and Mongol Shovajatra (kind of rally) with many symbol, brought out by students of Dhaka University’s Institute of Fine Arts were the main attraction in the capital. The campus was covert by the Rapid Action Battalion, police & swat (a special force), maintained vigilance to avoid any unseemly situation.
From the previous night, thousands of revelers crowded in Ramna Park, Suhrawardy Udyan, Central Shaheed Minar, and Dhaka University, Shahbag, Dhanmondi Lake and other open spaces. Roads extend from Matshya Bhavan to Shahbagh to Doel Chattar were made off or limit for all types of vehicles. Peoples were directed to walk in different entrance & exit way. The main crowds of people in and around Dhaka University, Ramna and Dhanmondi Lake almost made the city traffic network collapse. Youths painting their cheeks with Bangladesh’s map and emblem lent a special tone to the celebrations.
A cultural organization staged cultural function at Rabindra Sarobar at Dhanmondi, Boishakhi television at TSC, and Dhaka Swarokalpa at the DU Library.
A film festival of Bengali culture was opened at the National Museum, while a folk drama festival began in front of modhur canteen. Bangla Academy and Nazrul Institute held especial programmes.Shilpakala Academy organised a cultural programme at National Art Gallery in the evening.
A lot of shops opened with panta,hilisha & others thing around the DU campus. The Liberation War Museum organised a programme for the children and juveniles at its Café Theatre.
Especially the day was very cheerful for the children, went with parent and bought musk, many play things etc.
Many other organisations including Greater Mymensingh Cultural Forum, Bulbul Lalitkala Academy, Bangladesh Pathanatak Parishad, Rajshahi University Alumni Association also arranged various programmers’ in celebration of the day.