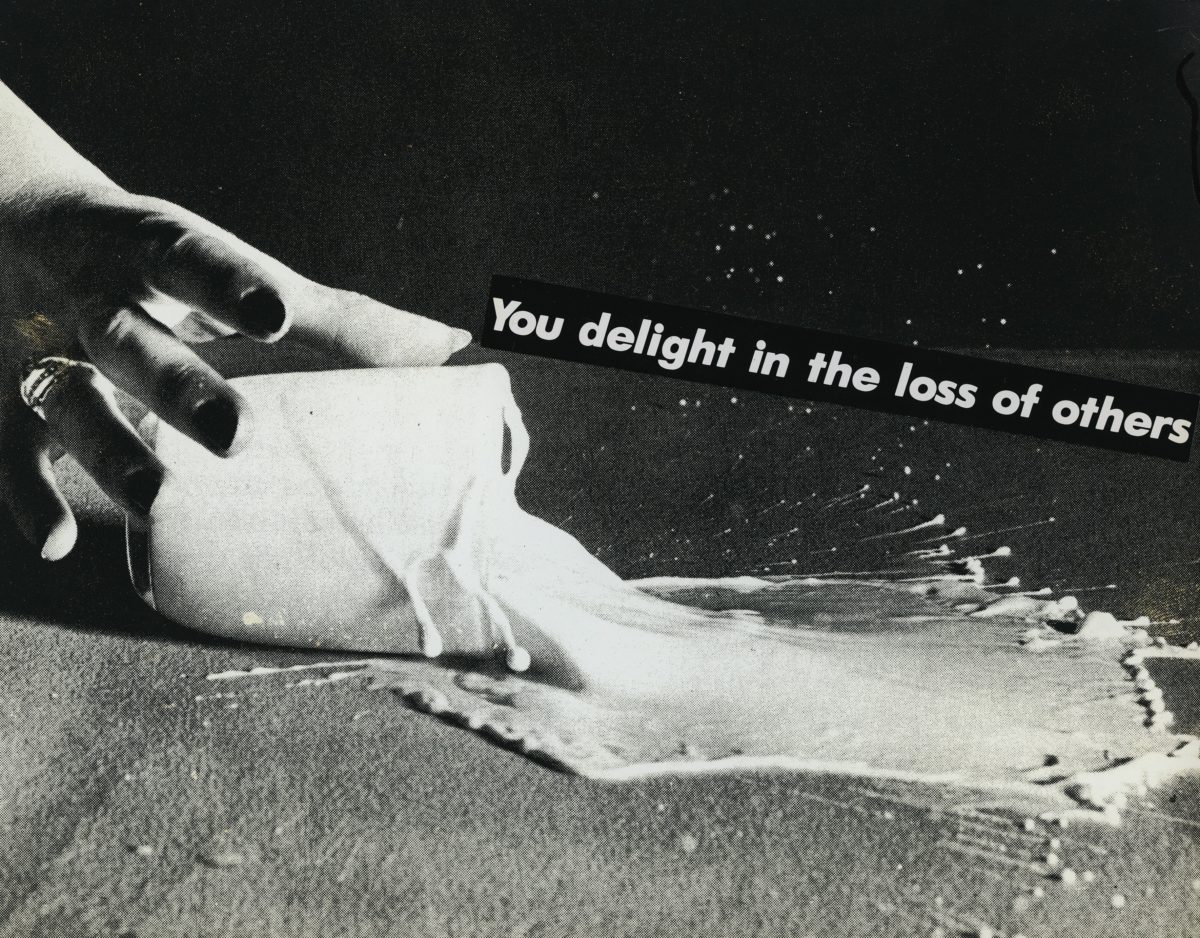 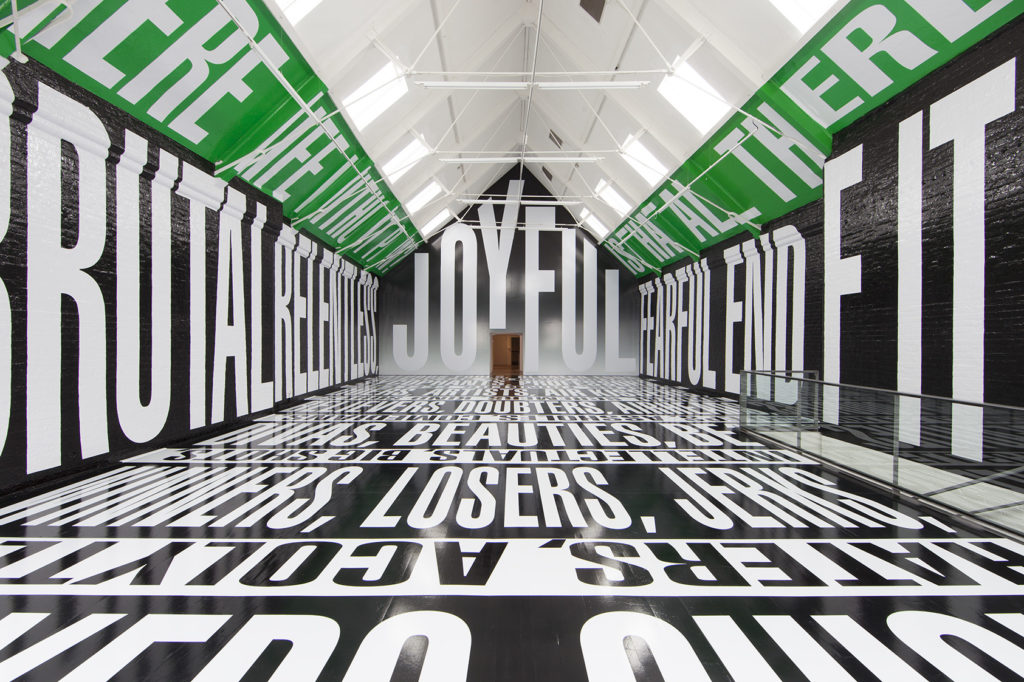 Between June and August, American conceptual artist Barbara Kruger was the very special guest of Modern Art Oxford, one of the UK’s leading venues for modern and contemporary visual art based in Oxford, England, with a major exhibition of her works.

Born in Newark, New Jersey, in 1945, Barbara Kruger studied art and design at Parsons School of Design, in New York, in the 1960s, before starting a career as a designer and becoming a picture editor for various publications.

Although she today says that she never thought she would become an artist at the time, Kruger did eventually turn to visual art, through crochets, sewing and painting, and got her work exposed in 1973, at the first Whitney Biennial, one of the leading shows in the art world, which takes place at the Whitney Museum of American Art, in New York City. She then went on publishing an artist’s book, “Picture/Readings”, with photographs the artist shot in California and Florida, showing unremarkable details from modest houses, alongside panels of typewritten words.

As her work was being recognised within the art world, her name was also linked to controversies, such as when she produced a poster for the Women’s March on Washington in support of legal abortion, in 1989. Or when she proposed to paint the American Pledge of Allegiance with some provocative questions on the side of a warehouse, in Little Tokyo, Los Angeles, in 1990. 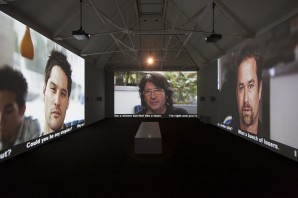 Despite the controversies, Barbara Kruger’s talent was far from fading as she went on exposing her sculptural work and setting permanent exhibitions, using impressive large-scale immersive video and audio facilities, in France, Sweden, Italy, England, Germany, Canada and across the United States.

Her work consists mostly of black and white photographs with overlaid texts that usually include declarative slogans, in an altogether dramatic presentation. She easily transforms familiar idioms into metaphysical statements, criticisms of sexism or more openly ironic political stances, for example: “Your comfort is my silence” (1981), “Your body is a battleground” (1985), or “I shop therefore I am” (1987).

Kruger’s interest in popular culture comes from films, magazines and reality television, which she describes as a useful measure of contemporary conceptions of value and materialism. When asked why she mostly uses photographs and texts in her work, she answered: “I work with pictures and words because they have the ability to determine who we are and who we aren’t.”

After four decades of iconic and provocative body of work, she is now known internationally (one of her photo even sold at Christie’s for nothing less than $902,500, in 2011), and not only has she exposed her memorable visuals in museums and public spaces worldwide, but she is also included in numerous collections of contemporary art around the world and she was awarded the MOCA Award to Distinguished Women in the Arts, in 2001, and a Life Time Achievement Medal at the Venice Biennial, in 2005. 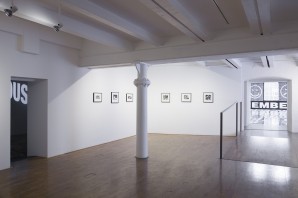 In her latest exhibition at Modern Art Oxford, Barbara Kruger used, overused and abused of the mass media visual technics purposely to cause the visitors of the gallery to think and to plunge them into the manipulative logic at work in the language of advertising and media in general, and somehow question them on values and consumerism. Two visuals showing a wall of emoticons, for example, pretended to question our relation to communication and to the social world, and demonstrated how we are influenced by and dependent on digital culture and digital technologies.

It was also utterly interesting and mind provoking to discover how the artist wrapped the entire Upper gallery from walls to floor with a site-specific text work made of black, white and green colours that precisely responded to the light in the room and entertained the space between the words and the eyes with philosophical questions such as “Is there life without pain?” or “Is that all there is?”.

Throughout the exhibition, Kruger involved the visitors in the work’s content. It was precisely what happened in the John Piper Gallery, where we were presented with a four-screen display of her film Twelve (2004) that portrayed twelve conversations between a series of characters from soap operas, talk shows and political debates, whilst we just sat between the screens and absorbed the reality TV culture. Unsettling. 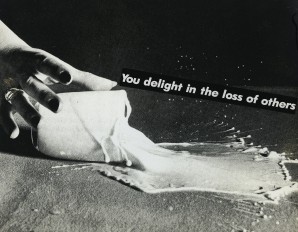 Finally, in the middle gallery, the American artist displayed a series of some of her paste-up works from the 1980s. Together with all the other pieces displayed in the exhibition, it reminded the visitors of the importance of individual meaning, personal values and critical thinking. Although it is more painful and far from the comfort of the submissive mind, a critical mind is a questioning mind.

This fantastic exhibition of Barbara Kruger’s latest works was a great way to discover or re-discover the reason why, without her consistent and substantial contribution, contemporary visual art would certainly not be what it is today.

PS. If you ever wondered what it looks like to install a gigantic art work in a gallery like Modern Art Oxford, do watch the time-lapse video of Barbara Kruger’s exhibition: http://youtu.be/ZqT9hcKNccY