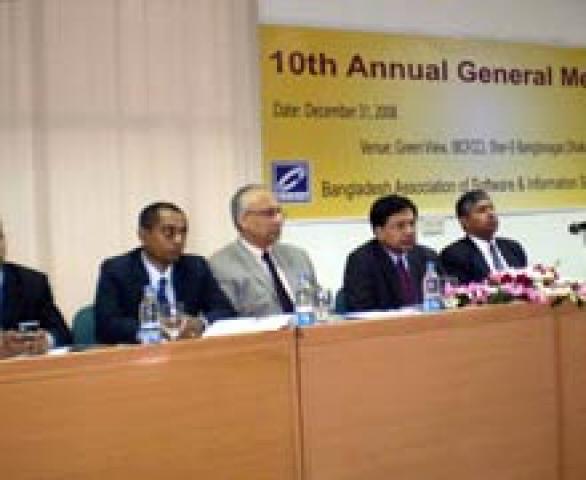 The 10th Annual General Meeting of Bangladesh Association of Software & Information Services (BASIS) was held on December 31, 2008 at the Green View Auditorium of Bangladesh China Friendship Conference Centre, Agargaon, Dhaka.
BASIS President Mr. Habibullah N Karim presided over the meeting. Among others Sr. Vice President Mr. Syed Mamnun Quader, Vice President Mr. Shameem Ahsan, Secretary General Mr. Nahid Ahmad, Joint Secretary General Mr. Zeeshan Mahbub, Treasurer Ms. Farhana A Rahman, Director Mr. Md. Ali Akbar Khan, Mr. Shafquat Haider and Mr. M A Mubin Khan and top executives of BASIS member companies were also present at the meeting.
Mr. Nahid Ahmad, Secretary General of BASIS in his introductory speech highlighted the major activities accomplished by BASIS in the year under report both within the country and beyond.
The Minutes of the 9th AGM of BASIS and Annual Report of the year 2008 were adopted unanimously in the meeting. Apart from that, the Income Statement and Balance Sheet for the year 2007-2008 and the Auditor’s report thereon were presented by the Trasurer Ms. Farhana A Rahman and were adopted by the meeting.
The meeting emphasised on promoting export of Software & IT Enabled services in the foreign countries and also develop domestic market of the software and ITES products as well. Members of the meeting advised BASIS EC to take proactive role to work with the newly elected Govt. in close collaboration towards making a digital Bangladesh by the year 2021, which is one of the major commitments of the newly elected Government.