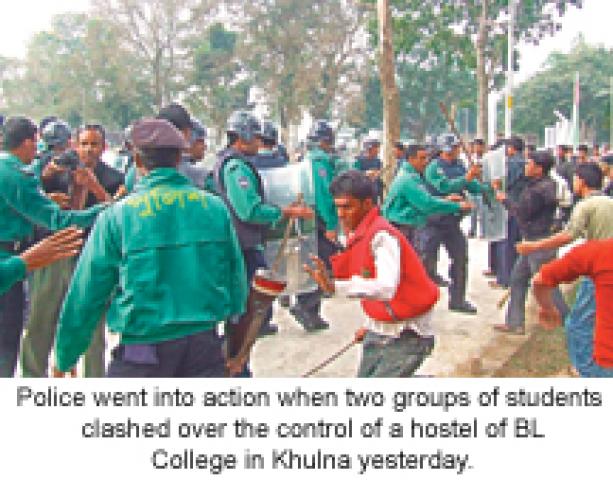 Daulatpur Government BL College has been closed today (Monday) for an indefinite period following violence on the campus centering the attempts by the activists of Bangladesh Chattra League (BCL) to capture two student dormitories dominated presently by  Islami Chattra Shibir (ICS) activists.
The students residing in the dormitories including two women halls have been asked by the college authorities to leave the place  by 5 in the afternoon today.
Sources said, tension gripped the college campus last night when some BCL activists locked four rooms of Dr Zoha Hall and asked the Shibir activists to leave the hall early today.
In the morning the Shibir activists swooped on the BCL workers and supporters, leading to a clash between the two sides. About a dozen students belonging to the two parties were injured. Among the injured were Mostafiz, Aziz, Noman, Tomal, Modhu, Mahbub, Polash, Hasib and Zulfiqur. Seriously injured  Mostafiz has been admitted to Khulna Medical College Hospital .
About one hundred BCL activists, armed with sticks and iron rods, made several attempts to capture  Mohsin Hall and Dr Zoha Hall on the campus but the police prevented them from proceeding towards the dormitories.
At a press conference at the press club this afternoon, Saidur Rahman,  president of ICS BL College unit, alleged that some outsiders joined the BCL workers in unleashing violence on the campus.
Police will continue to stay on the campus to prevent any untoward incident.