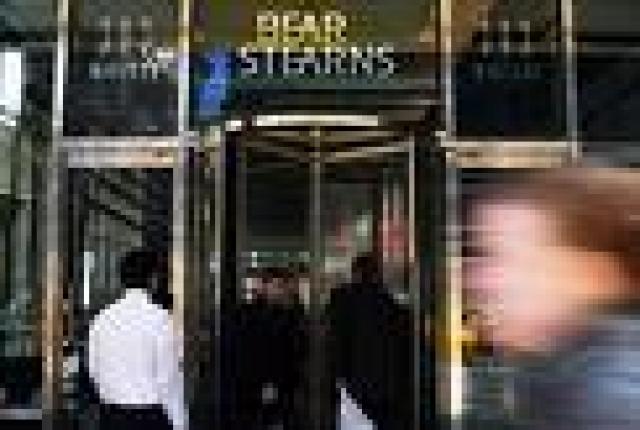 During the noon hour in trading on Wall Street on Monday, March 24th, the Dow Jones industrial average reached gains of over 245 points, about 2%, as investors continued to be encouraged by financial market help from the Federal Reserve as well as Fed overnight lending rate cuts that seek to lower national lending rates by another full percentage point.

What’s more, it was announced on Monday morning that J.P. Morgan Chase & Co was vastly increasing its takeover bid for troubled financial giant Bear Stearns from a meager $2 a share to $10 a share. The Federal Reserve and the U.S. Treasury Secretary have been helping the deal go through.

And to put a cherry atop the sundae for investors, the National Association of Realtors reported that sales of existing homes were up in February, marking the first time in seven months that such an increase took place in the troubled U.S. housing market.

According to David Rovelli, managing director of equity trading at brokerage Canaccord Adams, "The bottom is in place; people are happy we rallied on Thursday; there is a lot of money on the sidelines, and people are starting to buy…The housing number was okay, and the best performers in the S&P are in housing stocks – hopefully this is not a head fake and we get out of this."

Monday’s furious, bullish trading activity comes on the heels of two recent days of 400-plus point gains for the Dow, one of which saw the Dow realize its highest single-day gains in five years.

This bullish activity is not surprising to some economists and investment analysts, who take contrarian views of the gloom-and-doom scenarios offered up the so-called economic "experts".

Investors would be wise to understand that whenever fears of a recession rear their ugly heads in the U.S. stock market, what is happening is that stocks are going to go on sale–meaning that there is a golden buying opportunity, while the trembling fearful sell off the silverware (or, if they work for Bear Sterns, they worry about the dreadful prospect of having to sell their second home).

Any "expert" insisting that the U.S. economy already is in a recession or is going to enter into one in the first place is not only quite possibly wrong, he’s also a boldfaced liar.

But this is the way the experts gain their fame and fortune: playing upon people’s emotions, especially their more extreme and immediate emotions. Especially in an endeavor like investing, emotion becomes the enemy of reason, and immediate fear can be manipulated by experts to trump longer-term tidings of good fortune.

But in most things, the expert misses the obvious.

"It appears that people are interested in buying stocks every time there’s just a whiff of good news. We’re starting from a fairly modest level of valuations in this downturn and so perhaps people are right in suggesting that downside is limited," said John Carey, who manages $13 billion at Pioneer Investments in Boston.

Nevertheless, it is deeply disturbing that the Federal Reserve and the Treasury Department have such a heavy hand in all this market activity. The federal government is only seeking to solve problems that are mostly of its own creation–with the compliant media messiahs singing "hallelujah!" and the brain-dead liberals crying out for more of the same deliberate increase of the money supply, counterfeit dependence-creating bail-outs of those who make bone-headed mistakes, and resource misallocation inspired by artifically-created inflation’s twisted incentives.

What’s that rhythm I hear? "Boom…bust…boom…bust."