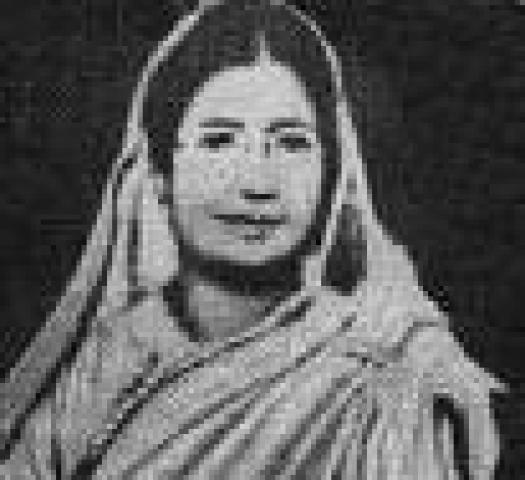 Begum Rokeya Sakhawat Hossain was born in 1880 in the village of Pairaband in the colonial British province of Bengal Presidency, which later became the northern part of Bangladesh. Born into an upper-class landowning Muslim family, Rokeya was not allowed to attend school, or even to learn Bengali or English, to prevent "contamination" from non-Muslim ideas. While her father was fairly forward looking in educating his two sons, he was not particularly interested in educating his three daughters. She was taught to read Arabic and Urdu, in order to be able to read the Koran and books on "proper" conduct for women.

According to one of her biographers, she so valued her identity as a Bengali that she defied custom and persisted in learning Bengali under the supervision of one of her brothers. To this brother, Rokeya Hosain remained grateful all her life. She wrote in dedicating her novel Padmaraga to him, "You have moulded me from childhood. . . your love is sweeter than honey which after all has a bitter after-taste; [your love] is pure and divine like Kausar" [the stream of nectar flowing in heaven mentioned in the holy Quaran].He taught Rokeya and her sister (who also became a writer) English and Bangla secretly at night. She remained grateful to this brother all her life.

In 1896, when Rokeya was sixteen years old, she married Khan Bahadur Sakhawat Hossain, the Deputy Magistrate of Bhagalpur. Her husband wanted from her not the traditional duty and obedience, but love and sympathy. He was proud of her quick intelligence and encouraged her to befriend educated Hindu and Christian women and to learn English. Many of her friends also encouraged Rokeya Hosain in pursuing her philanthropic and reformist activities. Sakhawat Hosain died in 1909, and left to his wife a considerable portion of his savings to be spent on women’s education. Rokeya Hosain carried out her husband’s wish by establishing a girl’s school (Shakawat memorial school) in Bhagalpur and then moved it to Calcutta, where it continues to flourish.

At a very early age, Rokeya Hosain made up her mind to fight against the unthinking observance of customs, especially those that struck her to be absurd or unjust. Rokeya wrote courageously against restrictions on women and to promote their emancipation, which she believed would come by breaking the gender division of labor. When women were able to undertake whatever profession they chose, she argued, then segregation and discrimination would cease.

Despite her outspokenness on issues such as purdah, her actions as a reformer were invariably tactful and strategic. All her life she herself used the burqa (the full covering of the body) when she appeared in public. In her school and among friends and relatives, she covered her head with the end of her sari. She pointed out that some form of veiling or protecting oneself from public exposure was common to all civilized societies of her time. She proposed a form of purdah that covered the body well without confining it. She supported a "necessary and moderate" purdah which would not be an obstacle to women achieving their potential. Initially, her requests for help in furthering women’s education were ignored by the rich and influential Muslims of Calcutta. So, in 1916 she founded the Anjuman-e-Khawatin-e-Islamm (Muslim Women’s Association), and slowly began to win support for helping disadvantaged women.

Hosain saw her writing as a means of challenging people to reconsider some of the basic principles of their society and thereby effect social reform. Her’s was the project of consciousness raising, and so she wrote mostly in Bangla. She strategized to adopt a style that would best carry out her purposes. She had a keen eye for the vulnerable points of her opponents, and used humor, irony, satire, and pathos to make her case. While her writings focused on the lives of Bengali Muslim women, she was deeply concerned with larger issues affecting the Bengali Muslim community as a whole

Rokeya wrote Sultana’s Dream in 1905 to test her proficiency in English. Her husband, who read the manuscript through without sitting down, was impressed. "A terrible revenge," he commented. He persuaded her to send it to the Madras-based, English language periodical the Indian Ladies Magazine, where it was published and well-received. In 1908 it appeared as a book.

Her concern with reforming and revitalizing the Bengali Muslim community was shared by other Muslim authors of the time who saw powerful rivals in both the Christian English and the Indian Hindus. These writers felt that if Muslims in Bengal were to survive as a distinct group and change their status as a weak minority, they had to accept certain aspects of modernity such as scientific thinking and education without damaging the fabric of Islam. The debates these writers fostered were silent on the question of women’s position until Rokeya Hosain raised it. She challenged traditionalist beliefs about the innate superiority of men on religious grounds. Similarly, she argued for the education of women as "the development of God-given faculties by regular exercise of these faculties." She argued that education led to self-realization and the fullest development of women’s potential as human beings, and thereby displayed God’s glory. This argument did not prevent her from also encouraging women to educate themselves not only in the arts but also in the sciences, so that they could work and become economically independent.

Today in Bangladesh, December 9 is celebrated as Rokeya Day. To mark the significant of the day, national dailies publishes special supplements and the city road crossings are decorated with posters and festoons. Similar programmes are also be arranged at district and thana level on the occasion. Begum Rokeya Smriti Complex having library, auditorium and research centre at pairaband the birthplace of Begum Rokeya has been built at a cost of Tk 3.30 crore for carrying out women development and research works. The Begum Rokeya Smriti Complex would be elevated to a women university in future.