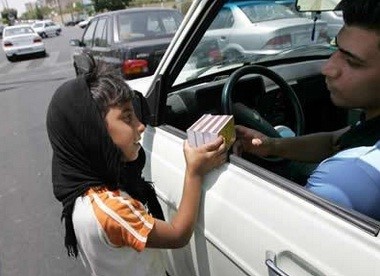 Behind the life of children in Iran 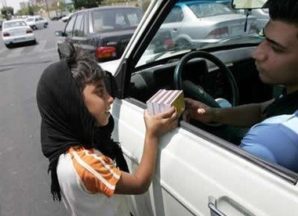 One day in a Tehran street I saw a small girl whose childish looks were lost while roaming the busy streets of a city like Tehran. She was no bigger than 7 or 8 years of age. However, behind the sun-burned looks, there was a special beauty and innocence like none other. When she saw me looking at her, she came closer and closer one little step at a time, saying: “Mister, can you buy some gums from me?” In an instance I felt my heart was bearing the heaviness of the entire world. I kept on asking myself why? Why shouldn’t this girl be in school right now? And why should she be roaming the harsh streets just to be able to get something to eat? And so many other whys… I was lost in my thoughts when the small girl lost hope of me buying any gums and was distancing away. I came to my self and said, “How much do all of your gums cost?”

Her looks were beaming of happiness and said 4,000 rials (equal to around $5 or $6 at the time). To feel as if I had done something I gave her the small money and told her to keep her gums. I thought maybe I could lessen some of this innocent girl’s pains… However, had I truly done anything? I still don’t know… because in my country, Iran, that has been under the mullahs’ fundamentalist rule for so many years, the people have seen nothing but destruction, poverty and the execution of thousands of Iranians. And unfortunately, there are so many such young girls across this vast land…

This story belongs to many years, but I have never forgotten the looks of that young innocent girl who tried to sell me some gums. Those looks changed the path of my life and until my very last breath I will never forget those moments. Those looks represented the pains and suffering s of Iran’s innocent young children, who are forced to beg just for a small meal.

However, through the eyes of a child, there is still a bright future in the horizon. This is summarized in a human being full of love for her country. A human being with a wonderful heart and patience seen never before. Maryam Rajavi, President-elect of the National Council of Resistance of Iran is a charismatic and brave woman that is struggling for democracy and freedom in Iran. She has the anti-thesis of the fundamentalism ruling Iran. She has relentlessly devoted her entire life for the cause of freedom in Iran. I will be looking for the innocent eyes of that innocent girl in Maryam Rajavi on June 13 in Paris where the Iranian Resistance will be holding its annual major rally