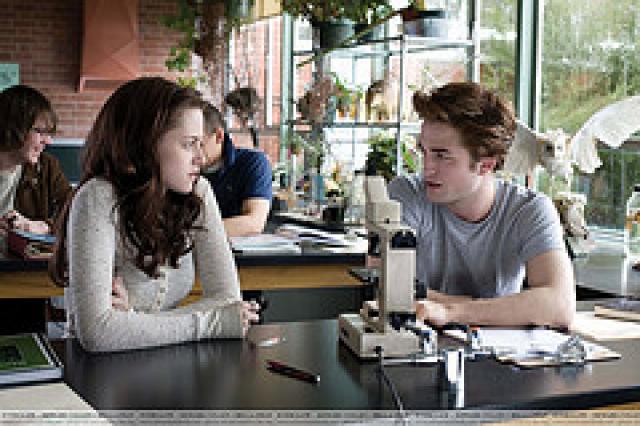 What is it about Stephenie Meyer’s Twilight saga that has everyone hooked?If you did not know what I’m talking about, the Twilight saga is a series of books based on the love between a human girl, Bella Swan, and her vampire boyfriend, Edward Cullen. It has recently been released as a movie, resulting in many sell-out crowds, especially screaming girls. I went to a cinema and when Edward made his first appearance, all the girls started wolf-whistling.

But it is not only for the teenagers – no – fans are ranging from the tweenies to grown-ups, even boys are getting a taste for the vampires. What is it that is literally sucking us all in? Is it the sexual tension between Edward and Bella? Is it the sensual visualisation of being bitten on the neck by a vampire? Is it their super abilities of being strong, hard and having sparkling skin in pure sunlight?

This list could go on for a bit. In some ways, it has replaced JK Rowling’s Harry Potter series, only this series seems more believable because the vampires are intertwined in the human world seamlessly. It is more believable than the boy wizard.Just like any other book, the Twilight saga provides a newfound sense of escapism for the reader.

It also demonstrates what the reader values, with "Team Edward" versus "Team Jacob". In the second book New Moon, Edward leaves Bella, believing its better for her to be without him, and she becomes closer to friend, Jacob Black. Of course, Edward returns to her, realising how much of a mistake it was for both of them, and they rekindle their romance. What is better to value – the guy leaving her, breaking her heart and returning to her? Or the guy who supports her, keeps her company and makes her happy again?

It appeals to the reader’s values and therefore involves them by siding them with different characters. Stephenie Meyer is quite a sloppy writer; I’m only into the story – that’s what makes it. Like Bella is Edward’s “drug”, Twilight seems to have the same effect on its fan base. It has reawakened our ability as readers to just dream and slip away into fantasy.