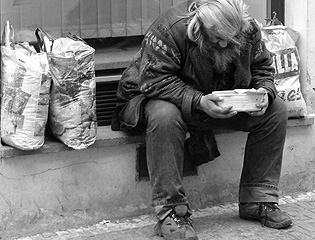 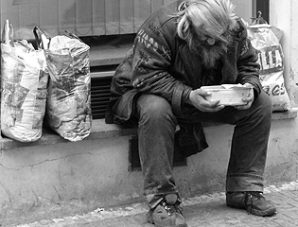 Poor, destitute man near 15th avenue and Van Buren in Phoenix, Arizona (not far from the Capitol)  resorts to eating out of garbage cans to satisfy the pains of hunger in America. Sadly Republican don’t seem to give a damn!

On June 14, 2014 Rep. Jim McGovern of Massachusetts gave an impassioned speech before the United States House of Representatives concerning hunger in America.

Sadly he done this to the absolute and utter disdain of many Republicans in Congress who seek to cut or eliminate the food stamp program altogether. When McGovern spoke many of these same Republican walked out and refused to listen to him?

Here is exactly what McGovern had to say:

“Mr. Speaker, being poor in America is hard work. Despite what some of my colleagues and many right-wing pundits might think, it simply isn’t easy to be poor in America.

Mr. Speaker, week after week, I come to this floor to talk about how we can end hunger now. It is a simple concept. We can end hunger if we muster the political will to do so. We have the food and we know how to do it. We just need the commitment to make it happen. Unfortunately, Congress has very consciously decided to make hunger worse.

In November, this Congress let a massive, across-the-board cut to SNAP take effect. The result was a benefit cut of $30 per month for a family of three. Imagine living on a fixed income, relying on food stamps to put food on the table, and then seeing your monthly allotment cut, without the cost of food going down. It is hard to make those numbers work.

On top of that across-the-board cut, this Congress passed a farm bill that cut an additional $8.5 billion from SNAP. Thankfully, a number of Governors have stepped up, covered those costs, and ensured that this cut would not impact poor people in their States. But not every State did the responsible thing, and poor people in those States will see an additional cut of $90 per month.

Make no mistake, Mr. Speaker, this is an assault on poor people.

Part of the problem is that very few Members of Congress have even the faintest clue what it is like to be poor in America. How many Members of Congress have actually visited food banks, talked to SNAP recipients, or stayed overnight in a family shelter? How many of my colleagues have even looked at a WIC, LIHEAP, or Medicaid application, let alone tried to fill one out or gone through the approval process? The answer, Mr. Speaker, is very few.

Too many of my colleagues either turn a blind eye to the poor or go out of their way to dismiss their struggles. Many of these Members who don’t take time to learn about the struggles of the poor are actually dispensing misleading information and are advocating for cuts to programs they mistakenly refer to as bloated and fraught with fraud, waste, and abuse.

Take SNAP, for example. Yes, it is a large program. We spend a lot of money ensuring that poor people have access to food. But until we do something about wages–and the first thing we should do is to raise the minimum wage, Mr. Speaker, so that people can actually afford to live their lives–we will be forced to either let people go hungry or help them buy their food. SNAP is that lifeline that helps put food on kitchen tables.

By the way, a majority of people who rely on SNAP actually work for a living.

Opponents of SNAP continue to describe it as fraught with fraud, waste, and abuse. This is absolutely false, period. The Center on Budget and Policy Priorities recently released a report explaining that the rates of both over- and underpayments have fallen considerably in recent years. In fact, the center found that less than 1 percent of food stamps go to ineligible people.

It is time we hear from people who are struggling to make ends meet. I was pleased that my friend, Congressman Chris Van Hollen, the ranking member of the Budget Committee, invited Tianna Gaines-Turner to testify before the Budget Committee last week, at the request of Congresswoman Barbara Lee of California.

Chairman Paul Ryan has held five hearings on the 50th anniversary of the war on poverty, and this is the first time a poor person actually testified before the committee. It is amazing that it took so long to hear from a person who is actually trying to dig herself and her family out of poverty. That is the good news. If you want to hear the bad news, you should watch some of the questioning she endured at the hands of some of my Republican colleagues.

Mr. Speaker, we need to hear more from people like Ms. Gaines-Turner, and we need to work even harder to end hunger in America.

I will close by saying to my colleagues that the poor in America are”, said McGovern.

Filed under: News, Politics
Share Tweet Pin G Plus Email
previous article: So how clean exactly is the endoscope being inserted up into your rectum and pushed up through your bowels? You may be surprised!
next article: The New Amanda Knox Smear Campaign Has Gotten Pretty Silly