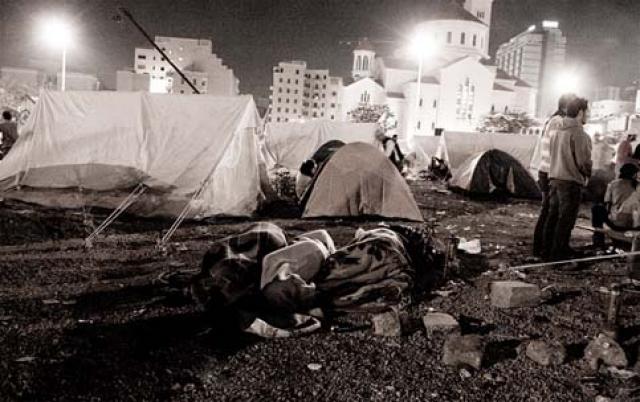 Supporters of the Hizbullah-led opposition began dismantling a protest camp outside in Dowtown Beirut on Wednesday after a deal was reached to end the country’s long political crisis, the deal was made in Doha, Qatar between the opposition and the goverment of prime minister Fouad Siniora and onlooked by the prince of Qatar Sheikh Hamad bin Khalifa al-Thani himself . Onlookers applauded as opposition members began gathering some belongings and throwing others into rubbish bins, nearly 18 months after setting up the "tent city" in a bid to force the Western-backed government to share more power or resign.

Speaker and opposition stalwart Nabih Berri announced an immediate lifting of the sit-in following the Arab-brokered deal between rival factions in Doha.

The protest began on December 1, 2006 when the opposition set up a sprawling "tent city" on streets leading to the Lebanese Prime Minister Fouad Siniora’s offices. It transformed a large portion of the city center into a ghost town, forcing dozens businesses to shut down. While young men tore down blue sheets of tarpaulin and dismantled the tents, employees in a nearby restaurant that had been forced shut since December 2006 were getting ready to return to work.

Cleaning crews from the government-contracted private firm Sukleen descended on Downtown Beirut in their distinctive green trucks to help the protesters get rid of their mattresses, plywood and other items. Minutes before the orders came to uproot the camp, opposition supporters were inside their tents glued to small television sets which broadcast live from the Qatari capital the historic agreement between feuding politicians.