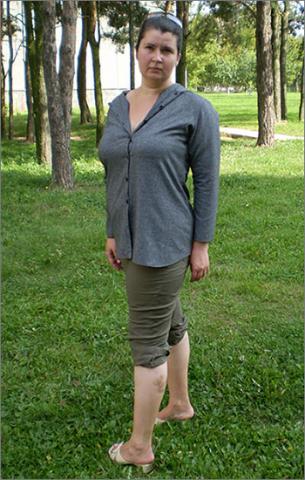 3 of March court of Soligorsk district found her guilty in accordance with article “Deliberately false Denunciation” (Belarus Criminal code, article 400, clause 2). She had been accused to provide false information about actions of militsia officer. She had been sentenced to 2.5 years of limitation of freedom and had  to pay a fine at the amount of 1 mln. Belarussian rubles (about 300 US dollars) for moral damage to the person, who she said, beat her.

Yana insisted that local militsia inspector  beat her, after she refused to sign papers with false statement that she hadn’t collected signatures in support of  Olga Kozulina. Polyakova complained to Soligorsk prosecutor’s office. Her complaint was refused and in a 4 months term, at the start of January, criminal case had been launched against herself.

6 March president Lukashenko administration newspaper "SovietBelarus – Belarus today" with circulation about 500 000 issues and distributed all around the country published pasquil on her case.

Yana ‘s friends told she was shocked by

the sentence and all the chase campaign against her in a little town she lived in —Soligorsk. The whole criminal process wasn‘t fair, nor unbiased and had numerous law violations, they said.

didn’t report any comment from militisia on this case, nor statement on the investigation about the reason of lawyer’s death. By prior information funeral will take place 9 or 10 March. Evening 7 of March friends, opposition activists and politicians made an action in her memory at the Svyato–Dukhov Ortodox cathedral in Minsk, Belarus capitlal.

rights advocate often have problems in the country due their activity. October 2008 famous advocate Vera Stremkovskaya head of Belarus Human Right Center, lawyer, who worked for prominent opposition politicians and recently protected interest of clients complaining against criminal actions of militsia officers, suddenly left the country with no explanation. "She moved to Switzerland by her personal reasons", journalists were told later. Stremkovskaya herself didn‘t make any comment so far.

a public holiday in Belarus since Soviet time as Day of Working Women International Solidarity. Belarus president has already issued usual address to Belarus women with thanks to all "daughters of Belarus who are samples of patriotism, hard working and civil duty fulfilment".

small steps of Belarus officials on the way to democracy. Belarus opposition calls it just "decorations of dictator who desperately needs money from East and West", and urges do not trust this regime.