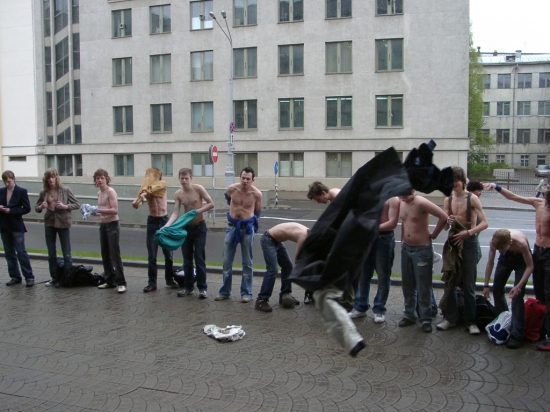 Belarus youth made a flash mob protesting against cancel of benefits for students, such as half-price ticket in any public transport during the scholar year. 10 of May evening about 30 guys gathered at the main entrance to  Ministry of education in Minsk (Belarus capital). They took off their T-shirts and shirts shouting: "Choke with yours benefits". Then they pulled on T-shitrs with slogan "For our freedom!" and went away. Nobody’s arrrested.

Belarus officials are going to change dramatically the famous soviet-style system of social benefits for deprived ranks of society such as handicapped persons, retireed peoples, veterans and ex-prisonners of fascist camps and gettos, Chernobyl disaster fighters, children less than 3 years old and students.  So far only students expressed theirs protest. Belarus parliament is going to debate the draft bill 23 of May. But there isn’t any doubt that delegates will vote "for" this reform intitiated by the president of the country Aleksander Lukashenko.

Filed under: World
Share Tweet Pin G Plus Email
previous article: The Arabic Channels puncture cultural isolation: Aljazeera, a major source of news
next article: Mother’s Day and the history of the origin