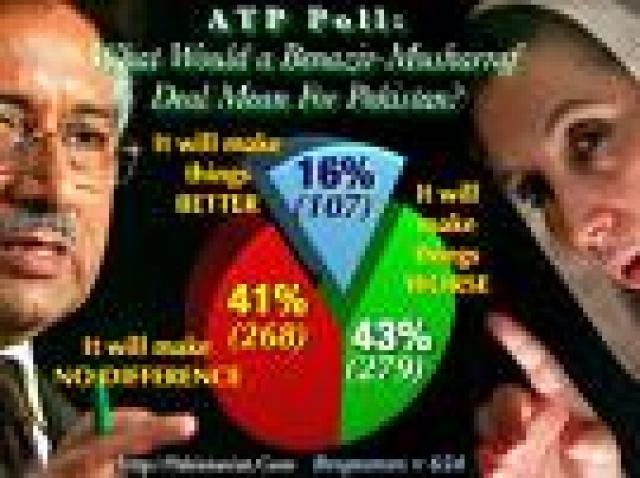 Ending her eight years self-imposed exile, former prime minister and leader of Pakistan peoples Party Benazir Bhutto has announced to return to Pakistan on October 18. She has announced to land in Karachi and vowed to lead her party in the forthcoming parliamentary elections. Ms. Bhutto has been the centre of criticism for having dialogues with embattled Gen. Musharraf for brokering a power deal and ensuring that all corruption cases against her be dropped and her frozen assets are released. She is learnt to have already managed to get more than two million dollars of frozen bank accounts released, but fate of corruption cases pending against her is still not decided by the government. Therefore, reliable sources are claiming that she might be given a surprise on her return and might be put behind the bars on account of the pending corruption cases.  While announcing her return, Ms. Bhutto acknowledged the talks with Gen. Musharraf and his team-mates but said that talks have stalled. Without going into details, Ms. Bhutto said that “ball is in Musharraf’s court now and we are awaiting his decision on uniform.” “Benazir Bhutto is returning to provide true democracy to Pakistan,” Makhdoom Amin Fahim, the vice-chairman of Bhutto’s Pakistan People’s Party, said at a news conference held at the party’s secretariat in Islamabad on Friday afternoon. “She will land at Karachi international airport and then visit the mausoleum of Mohammed Ali Jinnah.” Bhutto, who leads the biggest opposition group, lives in exile in Dubai and London to avoid corruption cases filed against her. Bhutto will lead her People’s Party in forthcoming elections, Fahim said. Bhutto’s talks with Musharraf on a power-sharing agreement have stalled. Bhutto, 54, wants Musharraf to seek re-election from the next parliament after quitting as the army chief. Musharraf is seeking a five-year term in an election that must be held between Sept. 15 and Oct. 15. Parliamentary elections are scheduled to be held by Jan. 15. Musharraf, a key U.S. ally, is facing the most widespread opposition to his rule since he took power in a military coup in October 1999. Bhutto has agreed to support Musharraf as president if he accepts her demands to step down as army chief and allow her a third term as prime minister. The 64-year-old Gen. Mushharf and Bhutto held talks in Abu Dhabi in July. Musharraf needs her support to overcome opposition to his move to extend his eight-year rule. Many political observers believe that since Americans are backing Bhutto, therefore she might not be given the same deal what Nawaz Sharif received upon his return from exile. Ms Bhutto’s situation is completely different from that of Nawaz Sharif and all she was looking during the talks with Gen. Musharraf was to restore true democracy to Pakistan. U.S. Secretary of State Condoleezza Rice’s top deputy urged Pakistani Musharraf and Prime Minister Shaukat Aziz to resolve political disputes with potential rivals ‘peacefully’,’ days after the expulsion of former Prime Minister Nawaz Sharif. Deputy Secretary of State John Negroponte during his meetings with the President and prime minister in the past couple of days has touched on internal political developments in Pakistan, State Department spokesman Tom Casey said while briefing the newsmen. Pakistan prevented Sharif returning to the country on Sept. 10, deporting him to Saudi Arabia to where he has lived for seven years. Pakistan’s Supreme Court had ruled he should be allowed to return home. Meanwhile, ruling coalition partners have voiced their concern over the deal with Bhutto and president of Q league Chaudhary Shujaat Hussain has categorically conveyed it to Gen. Musharraf that Bhutto should not be given any concessions and should be asked to contest elections and then ask for any bargain based on her party position after the general elections. Chaudhary was of the view that Q league would not budge before Bhutto and would like to elect President from the present assemblies and they are least bothered about any challenge from Bhutto or Nawaz Sharif but are more concerned about the judiciary, which according to Chaudhary stands in front of any move of the present government.