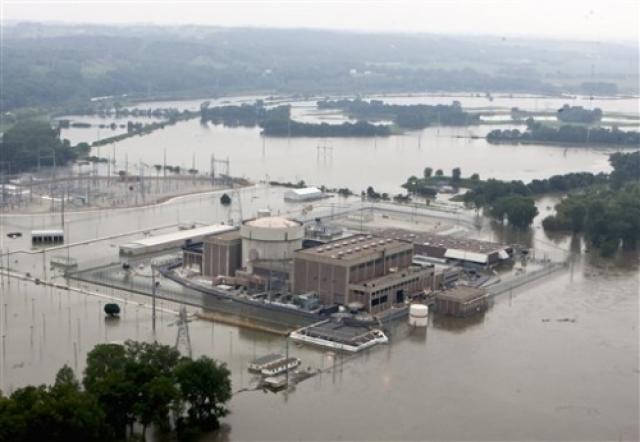 (Originally published at the Daily Censored for Project Censored.)

The A.P. reported today the Chairman of the Nuclear Regulatory Commission (NRC), Gregory Jaczko and his team arrived today to tour the two plants. At the moment, the Cooper nuclear power plant is still up and running since it remains above the floodwaters. However, the Fort Calhoun plant has remained shut down.

The NRC has said that since the plant has been shut down and there is currently no water inside, there is no danger. In addition, the A.P. reports the Missouri River Fort Calhoun plant is designed to handle a flood past the level the Missouri River is expected to rise. The A.P. goes on to report, “The NRC says its inspectors were at the plant when the berm failed and have confirmed that the flooding has had no impact on the reactor shutdown cooling or the spent fuel pool cooling. NRC spokesman Victor Dricks says the plant remains safe.”

As more and more governments worldwide begin to come to grips with the untenable costs and unparallel danger nuclear energy presents, the U.S. is still attempting to ramp-up it’s nuclear energy production. As I reported last week in my article “Fukushima Forever” the U.S. is currently considering building a series of new “mini-nuke” plants. At the same time, the A.P. reported a consistent trend by the NRC to loosen-up safety regulations for aging nuclear power plants.

Writing at Truth Dig, Amy Goodman of DemocracyNow! explored the connection between the Obama administration and the nuclear industry:

“Obama established what he called his Blue Ribbon Commission on America’s Nuclear Future. One of its 15 members is John Rowe, the chairman and chief executive officer of Exelon Corp. (the same nuclear-energy company that has lavished campaign contributions on Obama). The commission made a fact-finding trip to Japan to see how that country was thriving with nuclear power—one month before the Fukushima disaster. In May, the commission reiterated its position, which is Obama’s position, that nuclear ought to be part of the U.S. energy mix.”

The intimate connection between the Obama administration (Democrats in general) and corporate interests have always disturbed me. The Democrats claim they are fighting for the little guy, the common man. Yet time and time again they hold hands with The Man. As a result, there is no one in government representing the health and welfare of everyday Americans. We the people have turned over our power to America’s corporatocracy. As they keep telling us, “there is no danger”.  Oh, and “pay no attention to that man behind the curtain”.

Filed under: Health & Science, US
Share Tweet Pin G Plus Email
previous article: Ozone Layer Recovery
next article: Indian Army Chief will have to retire in 2012