The desire to achieve financial freedom is present in everyone – the ability to do whatever you want in life without worrying about your income or spending. This is probably why you can find many courses and workshops revolving around topics such as managing finances, maximizing profits, and investing wisely. These topics are widely available as they are topics that interest almost everyone.

Unfortunately, there are also many scams and get-rich-quick schemes out there that are trying to hook gullible and naïve individuals who wants a “shortcut” or a “fast lane” to get rich. There is obviously no shortcut, only proper knowledge of how to handle your wealth wisely.

Board Games as Platforms to Learn about Financial Management Skills

Among the best ways to gain know-how on investing and managing resources wisely is surprisingly through the traditional board games. To many, board games are just a casual activity to spend leisure time with loved ones, or a way to strengthen bonds between the players, but there is more than meets the eye. Board games are also a great way to inculcate moral values and learn about valuable life lessons such as resource management and investment. Moreover, playing board games can be more interactive and engaging compared to attending seminars, workshops or even games in PCs.

Hence, below are a list and description of top board games that subtly teaches one about resource management, maximizing profit, and forecasting to expect future risks and opportunities.

You cannot write about an article about financial management board games without including what is arguably the most popular board game in the world – Monopoly. One of the most well-loved board games that has intrigued players spanning across generations since the early 1930s, Monopoly is a game about managing your finances to be the richest player by the end of the game, determined by total property and cash owned.

Starting with equal amounts of wealth, Monopoly players move around the game board by rolling dice, while purchasing lands, erecting properties, collecting rent, auctioning for property, upgrading properties; while avoiding being thrown in jail and braving “Community Chest” and “Chance” cards that create situations which might change a player’s fate in the game. Throughout the course of the game, players need to constantly make decisions on which properties to invest on, how much money should be spent and saved in case of emergencies. One wrong move might lead you to lose a large amount of finances and even bankruptcy! The mechanism and gameplay is simple enough to include children into the game; at the same time teaching them on how to manage their wealth and making wise purchasing decisions. 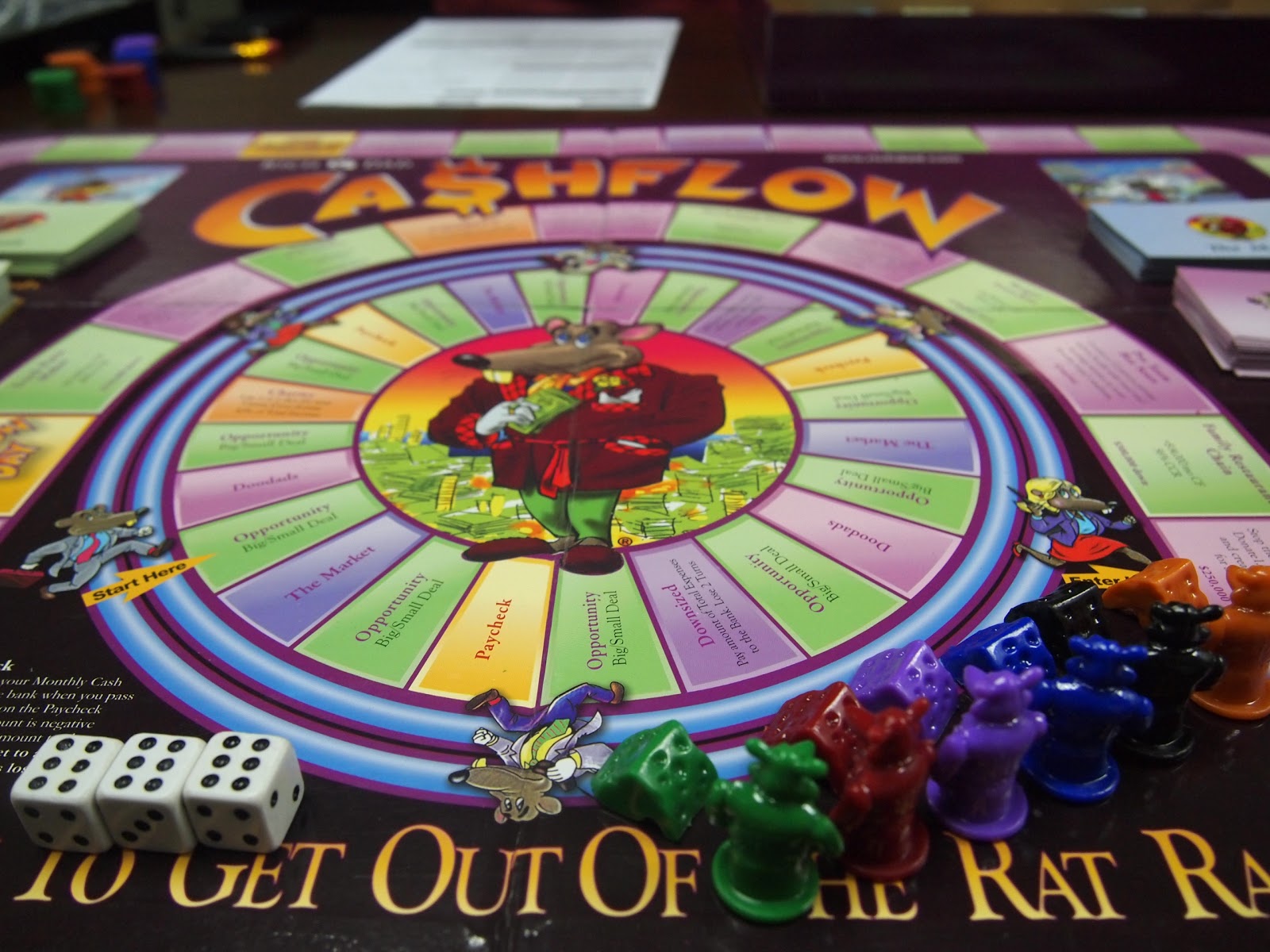 This board game is the brainchild of investor, businessman, and self-help author Robert T. Kiyosaki, of the “Rich Dad, Poor Dad” fame. Cashflow 101 is a game that combines fun with financial education – teaching players on financial strategies and accounting principles.

Before the game begins, players can choose a career from a variety of choices (Airline Pilot, Lawyer, Mechanic, etc.) and fill out their financial sheets accordingly. As the game progresses, players will need to update the changes to their financial sheets. The board consists of two tracks: An inner circular “Rat Race” track where players can only roll one die to advance, and a “Fast Track” outer track circling the “Rat Race” track which players can advance by rolling two dices.

For the Rat Race track, players get paid for passing through the Paycheck space, and then they will draw from one of four decks depending on the space in which he/she has landed. Some of the deals are good, others are bad. While in the Rat Race track, players will find themselves having shortage of cash to perform some of the tasks, while in the Fast Track, players will have a problem of having excess cash and needing to look for ways to invest their money before they are plagued with lawsuits, divorce, or tax audits.

Cashflow 101 teaches players the principles of cash flow, how to take charge of personal finances, and the fundamentals of investing. The board game is a fun way of teaching money management techniques and taking calculated risks that will result in multiplying your wealth. Players will be able to learn about the basics behind investing, how to handle income and expenses wisely, and ways to increase your finances exponentially to steps ahead.

Puerto Rico might be the least known board game in this list, but it should not be underestimated for the lessons and values that it carries. The gameplay is all about players being capitalist-minded colonial governors on the island of Puerto Rico. The aim of the game is to collect the most victory points, either via constructing buildings or by shipping goods to Europe.

Each player will have their individual player board with specified spaces for plantations, city buildings, and resources. There are also resources that are shared between players, such as ships, a trading house, and doubloons. During each round, players choose a specific role card that is available, whereby each role has their own specialized function. The ability of the particular role will affect all players, with the player choosing the role having an added advantage that only he has a choice to perform. For instance, when the “Builder” role is chosen, all players can construct a building, but the player who chose the role can construct with a discount during that turn.

This unique mechanism, whereby only one player can choose a particular role per round changes the game dynamics, as there might be a few players who might be vying for a similar advantage but only one will be able to enjoy it. Moreover, roles that were unused will gain a doubloon bonus at the end of each turn, so if they were selected in subsequent turns, the player will be able to gain all the doubloons assigned to the role. Players gain victory points for owning buildings, shipping goods, and for manning buildings that were built. As the game progresses to the later stages, the game becomes even more strategic, as scarce resources and limited actions will require players to think strategically to prevail.

This game is a great game to test one’s capability in managing resources to gain an advantage above the others and how to plan for future actions. It also teaches the players on how investments can be positively or negatively by the changes beyond their control, so they must be prepared to embrace these changes. As the name itself suggests, Stockpile is an economic game that revolves around investing in stocks and shares. The game combines the classic stockholding strategy of buy low, sell high with other mechanisms that makes the game more interactive, unpredictable and fast-paced – all elements that equate into a great finance management game.

In Stockpile, players act as stock market investors that are hoping to strike it rich by predicting the stock market and benefiting from the volatility of the shares; eventually emerging as the winner by having the most money at the end of the game. The game consists of a unique element – insider information. Each player will be given insider information every round, whereby it consists of info on how a stock’s value will change at the end of the round. Knowing whether a stock’s value will be increasing or decreasing will dictate the player’s action in terms of bidding for stocks and keeping and selling stocks at the appropriate time.

After receiving the insider information, players will purchase stocks by bidding on a particular stack of stocks – a mixture of face-up and face-down cards placed by other players in the game. Not all cards are stocks though as the Stockpile also incorporates real-life elements such as trading fees, which might cause players to pay much more than the amount that they had bid. Moreover, there is another element that will affect the buying and selling of one’s stocks – the majority shareholder bonus at the end of the game. This will make players to think twice on whether they should take the risks and hold on to some stocks (facing the possibility of bankruptcy) to become the major shareholder in the end, or to sell stocks in order to have more cash for future biddings.

Stockpile not only teaches the basics of investing, but also introduces the volatility of the stock market to players who might not have real-life knowledge about the stock market. The game also requires players to take calculated risks and predict possible future outcomes to make better decisions to ultimately emerge as the ultimate victor. Stockpile also has a variant for seasoned players, in the form of characters (resembling real-life billionaires and moguls) that have their respective starting income and special abilities that adds more dynamics and unpredictability to the overall gameplay.

The skills required to achieve financial prowess are not only obtained through workshops and self-help books but also via the medium of board games. Board games are no longer merely a pastime activity, but they can also be fun and engaging platform to promote vital values and skills for your career.

This article was written by Jonathan So from iPrice Group.

Filed under: Gaming, Lifestyle
Share Tweet Pin G Plus Email
previous article: Ukraine is set to make Europe pay the bill
next article: How to dress at 50 years of age for a stylish look and fashion