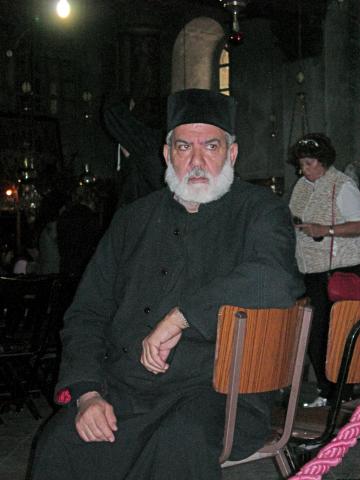 Bethlehem was once known as the birthplace of King David and the spot where the biblical story of Ruth and Naomi took place. The Jewish matriarch Rachel is buried just outside the little town.  Today there is no longer any Jewish presence in Bethlehem.

Of course, Christians revere the hilly town of Bethlehem as the birthplace of Jesus, marked by the Church of the Nativity, but today, as Bethlehem is part of the territory governed by the Palestine Authority, the Christian sites are preserved and protected to encourage the tourism that powers the Bethlehem economy, but the once dominant Christian population has dwindled drastically since the mid-1990s when Yasser Arafat and his merry men from Tunis swept into town and established themselves just a 10 minute drive from Jerusalem.

Today, the picture you get depends on which Christians you talk to in Bethlehem.  On a visit earlier this week, "official" Christians like the Mayor , Dr. Victor Batarsa or the dean of the Bethlehem Bible College, Rev. Alex Awad, assured visiting journalists that things are fine for Christians in Bethlehem. The mass Christian exodus from the town, they will tell you,  is a result of the high unemployment (around 28%) and general lack of opportunity–no explanation as to why those factors dont seem to affect Moslems ths same way.

Others, like Sami Qusieh, founder and president of the Bethlehem based Nativity TV station were more explicit about the atmosphere of discrimination and intimidation experienced by practising Christians at the hands of their Moslem neighbors.

Meantime, tourists from all over the world-particularly former Communist countries,flock into Manger Square in the days before Christmas.