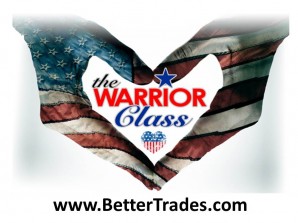 BetterTrades, a national stock market education company based in Atlanta, Georgia, has raised $7,500 for the Wounded Warriors Project.

BetterTrades hosted the “Warrior Class” on June 23, 2014, and donated all registration fees for the event to the Wounded Warriors Project. More than 120 students attended the two-hour online event; some donated money beyond their registration fees and instructors donated their fees.

“I believe this was a wonderful way for us to say ‘thank you’ to the men and women who protect our country by their service in the military,” said BetterTrades CEO Bill Corcoran. “I served in the U.S. Army and I’ve had friends and relatives have served. Some of them didn’t come home because they paid the ultimate price. This is just one way we could honor them for their service.”

The “Warrior Class” was taught by Mr. Corcoran and BetterTrades instructor Markay Latimer.

Mr. Corcoran is creator of the “Ultimate Options Trader” DVD series, which features more than 13 hours of instruction. He is host of the “Morning Lab” and “Boot Camp,” two popular online classrooms hosted by BetterTrades.

Ms. Latimer is creator of the “Trend Trading My Way” and “Technically Speaking” DVD series that teach BetterTrades students how to be more effective at technical analysis. Ms. Latimer hosts a live “Trader Talk” class twice each week to connect with students.

Since 1988, BetterTrades has been brining Wall Street Main Street and has taught thousands of self-directed investors how to trade in the stock and options market. BetterTrades offers and integrated approach that provides students with the knowledge, tools and techniques needed to make better trading decisions and give them potential to achieve their personal financial goals. BetterTrades offers online and live courses, as well as distance-learning material, that allows students to progress at a pace that is comfortable and compatible with their personal goals and trading strategies.