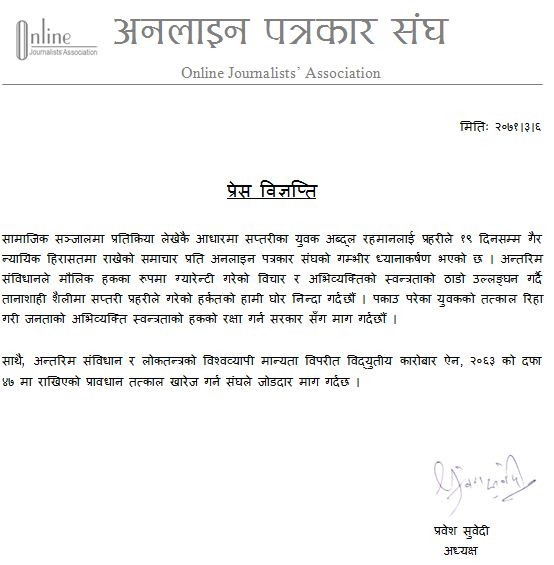 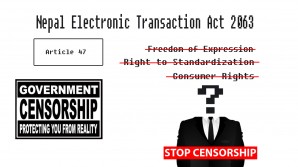 It has been confirmed that Nepal Police will arrest anyone writing against the organization or commenting on any of such issues published on social networking sites like Facebook or twitter. Recently in one of the case Abed El Rahman was arrested for commenting on a Facebook status and was put under police remand for 20 days.

His mistake was, he commented on a journalist’s facebook post of a story, ‘Improving security in Saptari’. Rahman on May 31 had commented as ‘how he to pay Nrs 50,000(USD 500) to bring back his looted motorcycle.’

He was released on Friday under the order of the Kathmandu District Court against the deposit of Nrs 5 thousand rupees (50 USD). The Saptari Nepal Police arrested Rahman under article 47 of Nepal Electronic Transaction Act 2063 for 5 years imprisonment and Nrs 0.1 Million (1000 USD) fine.

The Article 47 of the Nepal Electronic Transaction Act states,
Publication of illegal materials in electronic form: (1) If any person publishes or displays any material in the electronic media including computer, internet which are prohibited to publish or display by the prevailing law or which may be contrary to the public morality or decent behavior or any types of materials which may spread hate or jealousy against anyone or which may jeopardize the harmonious relations subsisting among the peoples of various castes, tribes and communities shall be liable to the punishment with the fine not exceeding One Hundred Thousand Rupees or with the imprisonment not exceeding five years or with both.
(2) If any person commits an offense referred to in Sub-section (1) time to time he/she shall be liable to the punishment for each time with one and one half percent of the punishment of the previous punishment.

The online journalist Association of Nepal in its press release stated, “The association condemns the arrest of Rahman. He should be released immediately as the Interim constitution of Nepal secures the rights of public for freedom of expression and arresting a person just for commenting on social networking site like facebook is highly concerning and alarming.” 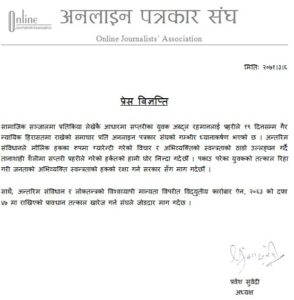 Chairman of the Freedom Forum, Taranath Dahal, said, “The comments by businessman Rahman is neither a hate word/speech nor has violated the existing laws. So, his arrest by the Nepal Police is a sheer abuse of the authority and violation of citizens’ right to express freely. Such incident suppresses the freedom of expression which is essential for the effective democratic system.”

In a similar case Nepal Police had arrested a government employee Raju Prasad Sah for commenting against a picture on facebook recently.