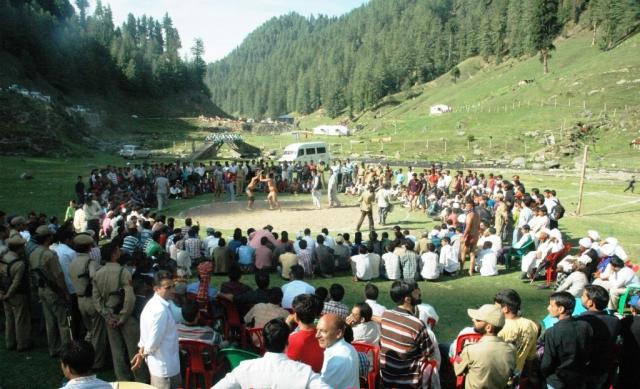 Bhaderwah/ Jammu, June 15 (Scoop News) –A meeting of officers was convened under the chairmanship of SDM Bhaderwah Sh. R.K Bharti at Dak Bunglow Bhaderwah to review the arrangements for four day annual Bhaderwah tourism-cum-cultural festival being organized by Bhaderwah Development Authority (BDA) in collaboration with District Administration Doda and Jammu and Kashmir Tourism Department   from 24th of June 2012 to 27th of June 2012.

It was revealed in the meeting that the inaugural function will be organized in (Boys) Bhaderwah where VVIP/VIP will inaugurate the festival and various Government Departments and private stake holders will  set stalls at the venue to provide first hand information regarding  various schemes of the government and variety of products to the public.

It was also informed  that during the festival various cultural activities will be organized which include a National level  Mushaira on 24th of June at Bhaderwah by J&K Academy of Art Culture and Languages (JKAACL) besides this Cultural Jhankies by school children and colourful cultural programmes will be presented .

Various sports activities will also be the attractions of the festival which include Paragliding, River crossing, Rappling, Tree climbing, Monkey climbing etc which will be conducted by the Jawahar Institute of Mountaineering and Water Sports at all the venues of celebration i.e Tourist Resort Jai, Khellani Top, Tourist spot Nalthi and Tourist resort Gatha.

During the festival adequate boarding and lodging facility will be provided to the visitors, concerned agencies were asked to ensure availability of transport facility from Bhaderwah to all the venues of the festival. Besides security,  Medicare, drinking water facility were also reviewed in the meeting. All the departments were directed to put in place all the arrangements well in time for successful and enthusiastic celebration of the festival.