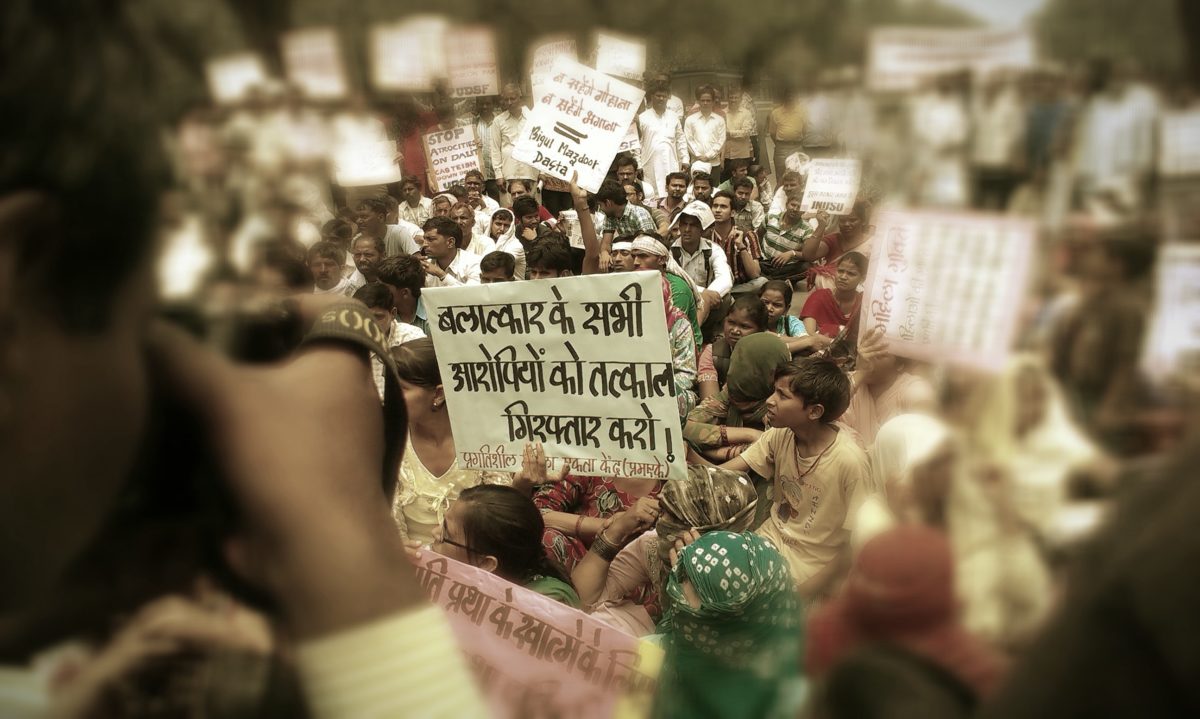 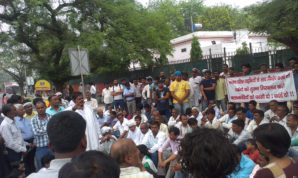 New Delhi, 11 May 2014: Hundreds of women, children and men from Bhagana village of Hisar, Haryana were joined by as many activists, students, writers, artists and others from Delhi in leading a warning protest under the banner of BHAGANA KAAND SANGHARSH SAMITI against Bhupinder Singh Hudda, the Haryana Chief Minister, seeking justice for the four school-going Dalit girls who were kidnapped and raped on 23rd March by upper caste goons. All the girls are under the age of 18. The protest also sought proper rehabilitation for the 400 displaced Dalit families who are living on the streets of Delhi and Hisar.

The demonstrators gheraoed CM Hudda’s residence at 9, Pant Marg in New Delhi where the heavy police arrangements at the threat of arrest and beating did not deter them. They demanded immediate action against the village head and his son who were directly involved in the rape and eviction. Jagdish Kajla, protest leader, said, “90 dalit families are living at Jantar Mantar since 16th April 2014 amid so many difficulties. The government has not provided us anything to survive, forget justice for the 4 girls. We will not take our protest back till our demands are met.”

So, what are their demands? They have submitted a memorandum to Mr. Hudda asking for the arrest of the village head and his son along with Gajraj and others whose names have not been included in the FIR. They are also demanding the safe rehabilitation of the victims’ families and a compensation of RS 10 million (one crore) to each girl victimised.

Another leader Virendra Singh Wabhoria , who is leading the evicted group’s struggle at Hisar, warned Haryana government that if their demands are not met within a fortnight, their protest will expand to other places of the country. Virendra is sitting on Dharna with 120 Dalit families at the Hisar Collectarate for last two years when these families were displaced from the village Bhagana by the upper caste people.

The girls are furious and so are their mothers. They say, ‘ Why every time, they make our bodies their battlefields?’ One girl studying in class 10th just wishes to someday be able to complete her studies. She says, ‘They have made us refugees. Bhagana is our own village but we can’t go there. What can be more fateful than this?’, she asks in desperation. One mother, with veil on her face, screams, ‘Aren’t we human? Why every time they do this to us?’ Huda has an answer, only in the form of huge barricades of police outside his house.

At the heart of the conflict in Haryana is the struggle over land – it’s use and ownership by the poor Dalits which has been grabbed by the dominant castes. No land reforms, or access to use and ownership of the common land schemes, have been implemented till date. Bhagana’s Dalits have been vocal about their land rights, having faced the atrocities and land grab since 2003. Rape is one of the major tools to silence the Dalit community and displace them in the name of honor. The Huda government never took action against the upper caste as Rajani Tilak of National Dalit Mahila Aandolan cites, “Huda says openly that first I am a jat and then a CM”. This factor contributed to Dalit atrocities in a much more organized way because the state machinery does not act in accordance with the law. After 67 years of the independence and on the threshold of 16th Parliament, Dalits in Haryana are landless, without exception. 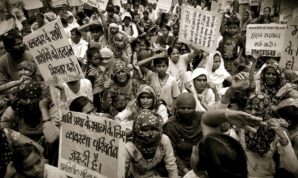 Jats dominate both the Gram Panchayats (Village councils) and the traditional Khaps. Their authority is backed by the significant presence of Jats in institutions and administrative positions. The state machinery thus is becoming part of propagating the entrenched caste ideology and hierarchies. The levying of sedition charges exposed a face of the state where it was no longer just exhibiting apathy towards tackling caste oppression, but actively using its authority and draconian laws to suppress any assertion challenging caste and class hierarchies. Protests against caste exploitation have become an expression of “disaffection” against the nation!

Despite all the above, the Bhagana protests showed that the Dalits are continuously pressurizing state institutions, and winning victories like withdrawal of sedition charges, and making the political class sit-up and take notice both within the state and the center. Alternative employment, education, intervention of political parties, government schemes and laws, and a greater awareness of rights has meant that Dalits too are now resorting to institutional spaces and methods. 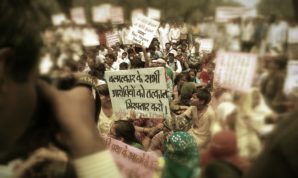 There is a section of the Dalit population that did not leave the village and join the protest. Dhanak community is the most vulnerable section amongst Dalits. They were among those who stayed back. Theirs are the poorest households. The silence that surrounds them is that of a complete economic dependence on the Jats, and signifies those who are still trapped in the hierarchical caste ideology.

The four victims of rape come from Dhanak community. They were kidnapped and gang raped for two days by Jat boys. This was the result of not leaving the village. Families of these girls were getting threats not to file the report with the police but eventually they managed to raise their voices against this oppression. This was one of the few cases of dalit atrocities that came into light, many such cases remain buried and unheard of.

The protesters want the government to heed their following demands:

1. Arrest all the offenders in Bhagana case including Village head and his sonand bring them to justice;
2. High level inquiry of the rape, displacement and land related cases;
3. Fast Track Court in Delhi for hearing of the case. Settle the case within 6 months;
4. Compensation of Rs 1 crore to each Bhagana gang rape victim;
5. Compensation of Rs 1 crore to each boycotted family in Bhagana;
6. A case should be filed against the KHAP and Gram Panchayat under the SC/ST Act;
7. Allot 400 yards plots in Gurgaon or Fridabad to each displaced family from Bhagana till they are suitably resettled in Bhagana;
8. Arrangement of proper education to all Bhagana gang rape victims and provision of government employment after completion of their education;
9. Ban on Khaap Panchayats;
10. 290 acre common land should be vacated from the clutch of the Dabangs and be distributed among the landless Dalits and other marginalised sections of the village .