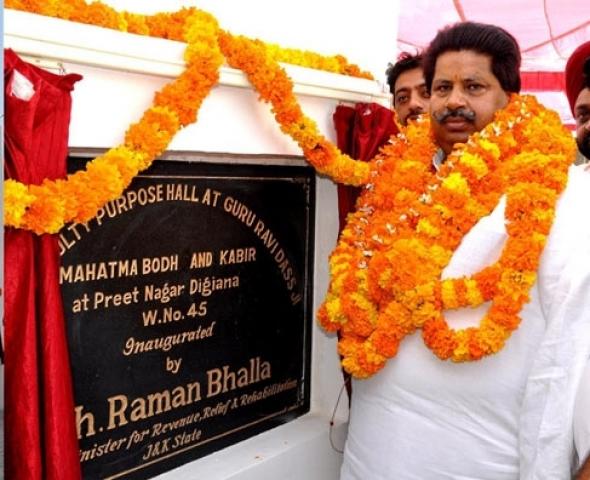 , October 10 (Scoop News) –Minister for Revenue, Relief and Rehabilitation. Raman Bhalla today asked the people to protect public properties in their respective areas adding the infrastructure being created by the government was meant for the convenience of the general public.

Addressing a public gathering in Jammu Raman Bhalla said the Government has launched several prestigious projects across the state to provide all basic utilities to the people at their doorsteps. He said focus of the Government was to develop all under developed colonies by providing safe drinking water, electricity, hospitals, schools, better lanes and drains besides road connectivity.

The Minister said instructions have been issued to the officers to put their sincere efforts in completing the ongoing projects within prescribed time frame. He said central and state Governments have provided liberal funding in development sectors to meet the developmental needs of the general masses.

Earlier he dedicated a multipurpose community hall to the residents of Preet Nagar in Digiana, .

Spread over an area of 5000 sq feet and involving a cost of Rs 1.50 crore, the newly constructed community centre has two big halls and other facilities, including toilet block, parking slot, kitchen and approach road.

A number of multipurpose community halls have been constructed across the state in urban areas to enable the residents to arrange   social and religious functions at nominal fee.

Bhalla said the Government has already spent Rs. 9 crore for construction of multipurpose community halls in poor basties like Barzalla, Bahu Fort, Shanker Colony in Channi Rama, Nai Basti, Digiana, Gangyal, Channi Himmat, Industrial Estate in Digiana, Sigligarh Kullian Govindpura and Bhour Kothey etc adding the these would have all facilities for organizing social as well as religious events, with kitchen, parking and other basic amenities.

Listing the developmental works completed and taken up in Digiana, the Minister said Rs 60 lakh have been sanctioned for construction of lanes and drains footpaths, waiting shed and surface drain at graveyard in Digiana area. He asked the JMC to complete the works within stipulated time frame by using quality material. He said Government is committed to provide better civic amenities to the people across the State.

The Minister said the Government has earmarked Rs. 68 lakh under Rashtriya Madhyamic Shiksha Abhiyan (RMSA) for construction of additional rooms, varanda, and compound wall at , Digiana.