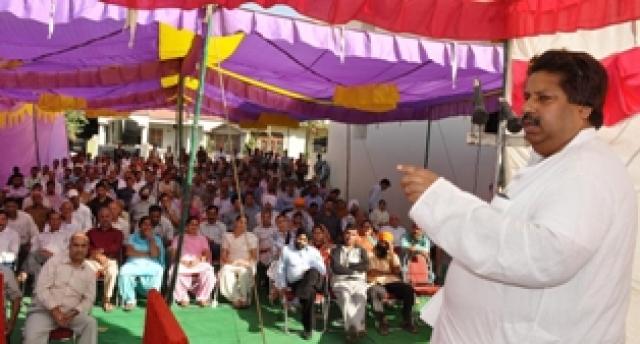 , November 06 (Scoop News) – Minister for Revenue, Relief and Rehabilitation. Raman Bhalla has said peace is the vital key for making a model State of the country adding that people’s cooperation is must for the Government to make the State a prosperous one.

This was stated by the Minister while addressing a large gathering at Pushap Enclave after dedication of Rs. 36 lakh double-storey multipurpose hall to the people of locality, here today.

. Bhalla called upon the people not to heed on nefarious designs whoever wants to use innocent for their personal interests and always disrupt peace, brotherhood, communal harmony and amity of the State. He asked them to give their whole hearted cooperation to the Government for maintaining peace and prosperity in the State.

The Minister said fulfilling of people’s aspirations and developmental needs is top agenda of the Government. He assured the people that all their genuine demands and development needs would be fulfilled in a phased manner.

. Bhalla said Government is fully aware of people’s hardships and is making all out efforts to mitigate on priority basis. He stressed upon the officers to bring in more accountability and transparency in timely utilization of funds available under various Centrally and State sponsored schemes for better infrastructural development of the State.

The Minister asked the asked the officers to reach people and mitigate their hardships on priority basis, without any delay. He warned the officers against any laxity with regard to the solving of problems of the people adding any complaint in this regard would invite strict action against the delinquent officers/officials.

Listing the measures taken by the Government in Gangyal area, the Minister said Government has dedicated two multipurpose community halls costing Rs 68 lakh to the people adding that the halls would be utilised for arranging social as well as religious functions on nominal charges. He informed that Government has earmarked Rs. 3.5 crore for digging of new deep drill tube well including laying of water supply pipes near Rajiv Gandhi hospital and its adjoining areas.

For facilitating the people of Gangyal garden, . Bhalla said Government has earmarked Rs. 1.20 crore for construction of bridge over nallah which was choked due flash floods during rainy season. He said people of the area have faced lot of problems during this year monsoon due to flash floods in nallah adding instructions were issued to executing agency to complete the project within stipulated time frame so that the locals could get relief from flash floods. For beautifying the one-kilometre long open space along Ranbir canal, he said Government has earmarked Rs. 1.6 crore for creating recreational park with facilities of illumination, drinking water, landscaping and walkway etc.

. Bhalla said the Government has taken some bold and historical steps to revive overall developmental profile of the State. He said sectors like PHE, health, R&B, education, tourism, power among other sectors have received focus attention of the Government adding it was due to its   pro-people policy that the masses at present benefited by quality education, healthcare facilities at their doorsteps.

Later, the Minister handed over multipurpose community hall keys to committee members of Pushap Enclave, Gangyal for use.