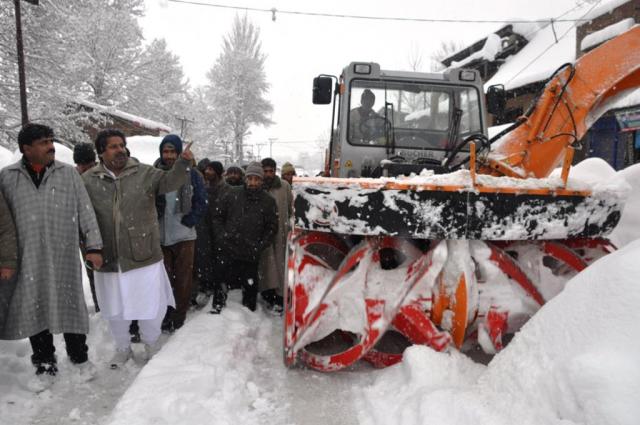 Srinagar,January 20 (Scoop News) –  To continue the efforts of the Government for alleviating hardships caused due to snowfall, the Minister for Revenue, Relief and Rehabilitation,  Raman Bhalla visited across the Jawahar tunnel (Nowgam) via Dooru-Verinag–Lower Munda route to review on-the-spot snow clearance arrangements made by the district administration.

During the visit, the people at Varinag told the Minister that the availability of essential commodities like rice, atta, sugar and K.oil is quite satisfaction. However, there is some shortage of LPG, which may be removed as early as possible. The Minister assured the people enroute that their genuine problems will be sorted out on priority basis.

Meanwhile, the Chief Engineer, Beacon, Brigadier T S Rawat briefed the Minister about the steps taken by the Beacon authorities to make the tunnel functional twenty four hours despite heavy snowfall. He also informed Mr Bhalla, hundreds of trucks and mini vehicles which were stranded on Jammu and Kashmir National Highway from last several days have crossed the tunnel by their best efforts. He said near about 20 snow clearance machines including snow cutters and manpower have been pressed into service to keep one-way traffic open on the National Highway so that the people of the valley may not suffer any more.

On the occasion,  Bhalla asked Mr Rawat to strengthen and redouble their efforts for making the national highway open for 24 hours so that essential supplies will reach Srinagar regularly.

Meanwhile, the District Development Commissioner, Anantnag, informed the Minister that 281 trucks loaded with different commodities, stranded near the tunnel, moved towards Srinagar

Earlier, the Minister also visited Dalgate and other areas of the Srinagar city and asked the people about their problems. He assured them that the Government is very sensitive to mitigate their hardships and redress their grievances as early as possible.

Earlier, a number of deputations from various walks of life, including Patwar Association, Kupwara, Keran, Gurez and Srinagar met the Minister and apprised him about their problems. The Minister assured them that their matters will be taken up with the concerned Officers.

The Minister was accompanied by Additional Commissioner, Kashmir  A.M. Mir, Deputy Commissioner, Anantnag, Syed Kifayat Hussain Rizvi and a number of Beacon and other officers.