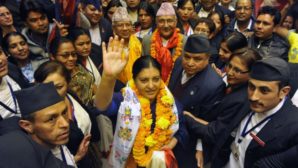 During the election held at the Legislature-Parliament building on Wednesday, Bhandari scored 327 votes that officially declared her President where Gurung scored 214 votes.
549 lawmakers cast votes in presidential election where  Speaker Onsari Gharti, declared Bhandari as the new President of the nation.

Bhandari replaces Ram Baran Yadav, who was the country’s first elected president in 2008 after Nepal abolished its monarchy.