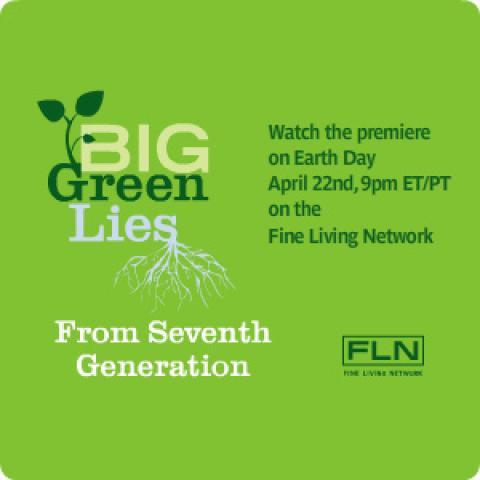 Finally, help arrives to separate “green” myth from fact with the help of Seventh Generation and the Fine Living Network.  On April 22 – earth day 2009 – join environmental activist, advocate and Seventh Generation President Jeffrey Hollender as he separates myth from reality when it comes to the conventional wisdom of green living. “Big Green Lies” airs at 9PM ET/PT, on Fine Living Network.

While many people have adopted small, easy habits to make their lives a little more environmentally friendly, some of those activities may be steeped in eco-fiction instead of fact.  For example, people are trading in their gas guzzlers for hybrids.  But, it may make sense to hit the used car lot instead when considering the environmental impact of producing a new car.  Or, people might look at conventional fuel-efficient cars that actual achieve greater gas mileage than its hybrid brethren.  And what about the eco-issues surrounding organic food?  Certainly organic foods that are grown and produced using sustainable, regenerative farming methods are good for the planet, but only if they’re not trucked, shipped or flown around the world before arriving at their final destination.

From the corridors of power to the halls of your home, follow the crew of BIG GREEN LIES as they perform mad science, track down the partisan experts, expert partisans, average citizens, rabid researchers, and other oracles who think they’ve got the ecological answers you’re seeking.  Tune in as host and Seventh Generation CEO Jeffrey Hollender dispatches his team of off-kilter operatives to locations around an overheated globe to separate ecological facts from fiction, addressing the issues that no one’s had the chutzpah to take on until now. Take a sneak peak at some of our attitudes to a few myths (yes, yours and mine!)  –  and trailer at www.biggreenlies.com

“As the name implies, Big Green Lies aims to reveal the falsehoods behind prevalent green myths and settle long-standing debates,” said Jeffrey Hollender. “Our team tackles a few of those questions in our first episode:

·         Paper or plastic-which really has sustainability in the bag?

·         Are disposable diapers as guilty of environmental sins as everyone thinks?

There are many, many Big Green Lies out there that need our attention.”  Take a sneak peak at http://www.biggreenlies.com and find out if your attitudes, ideas and knowledge match those of our own men and women on the street!

Filed under: Lifestyle, US
Share Tweet Pin G Plus Email
previous article: Khaleda Zia asked to leave Cantonment Residence within 15 days
next article: Three children including one girl burnt alive in Bani in Kathua of J&K