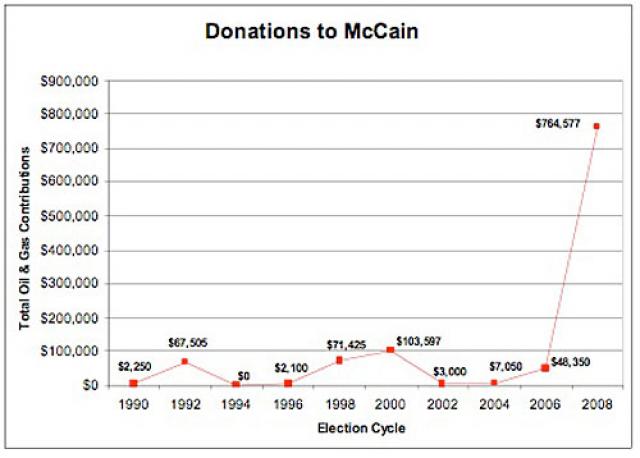 It must be gratifying for Sen. John McCain to know that his sudden flip-flop to support Big Oil’s long-held dream of offshore drilling is tapping into some of the deepest pockets on the planet. Because right after he reversed his long-standing opposition to oil drilling, he hit a gusher of campaign funds from the oil and gas industry.

McCain’s gambit to stock up his faltering fundraising struck a rich vein. As the Post continues:

“The timing was significant,” said David Donnelly, the national campaigns director of the Public Campaign Action Fund, a nonpartisan campaign finance reform group that conducted the analysis of McCain’s oil industry contributions. “This is a case study of how a candidate can change a policy position in the interest of raising money.”

The Public Campaign Action Fund has issued a new report detailing Big Oil contributions to McCain. Check it out here.

Offshore drilling is one of many recent flip-flops by the senator from Arizona.

(Get lot more McFlip-flops at Carpetbagger here. And check out Bill Press’ ongoing “101 Reasons to Vote Against John McCain.”) Also, stop by at McCain Revealed, where you can download fact sheets on a gamut of McCain’s policy positions on working family issues like the economy, health care, retirement security and more.