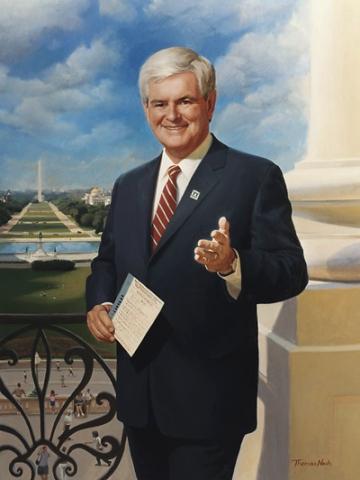 WHO SAID: “We should replace bilingual education with immersion in English so people learn the common language of the country and they learn the language of prosperity, not the language of living in a ghetto (Spanish*).”
.
???
.
ANSWER: Newt Gingrich, Republican Candidate to the 2012 US Presidency.
WHEN: In a speech to the National Federation of Republican Women, in 2007.
ANYTHING ELSE WE SHOULD KNOW: In 1995, he said that bilingualism poses “long term dangers to the fabric of our nation (USA*)” and that “allowing bilingualism to continue to grow is very dangerous.”
WHY TALKING ABOUT IT NOW: Because in Thursday’s debate for the Republican nomination, in Jacksonville, Florida, CNN journalist and moderator Wolf Blitzer mentioned a television ad produced by Mitt Romney‘s team that attacks Gingrich on the very subject.
CONCLUSION: Pretty scary to know what Gingrich thinks about blingualism, especially when one knows that the man could become the next President of the United States at the end of the year, if he is chosen by the Republicans to be their candidate and then goes on to beat current President Barack Obama, in November.
.
.
(Source: msnbc.com & The Boston Globe)
(*Author’s notes)
.
.
.
Filed under: Politics, US
Share Tweet Pin G Plus Email
previous article: Why Firms Win by Phin Upham
next article: Health Ministry Has Temporarily Suspended The Using And Selling Of Pakistan Made Cardiac Drug