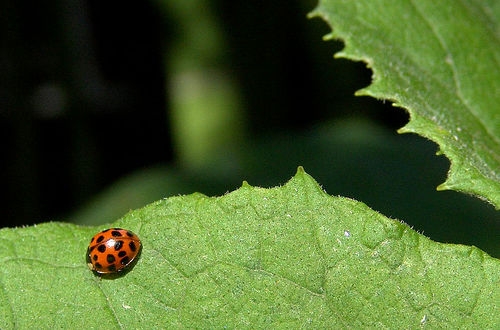 It’s not easy to be good.
You thought you’d do the responsible thing and buy some ladybugs (technically beetles and not ture bugs at all, known as ladybirds in the UK) at the
store to keep your roses clean instead of spraying poison. Little did you realize, you could be harming
your local eco-system and native populations by picking up that little,
clicking package at the garden shop.
It’s useful to arm yourself with some information about the creatures in
question to make good decisions.

Humans have utilized the talents of animals against each
other for millenia. Even our common companion
animals were domesticated to keep other animal invaders at bay. Because of the value and importance of our
food suppy, Departments of Agriculture in the United States and elsewhere have spent a hundred years and billions of dollars on pest reserach. Given how well we understand
the workings of these invertabrates, it stands to reason we would want to use that knowledge to set them against each other.

As more people are planting organic and sustainable food
plots of their own, the market for biological controls is expected to rise
dramatically. Unfortunately, the amount of damage
unrestricted bio-control agents could bring could show a similar increase. Until recently, there has been little
attention paid to non-native insect species brought into North America as a
bio-control agent unless there was a serious local problem. Unless a state or region-wide disaster has
been declared by the Department of Agriculture, it is legal to sell just about
any insect for use as a bio-control agent without restriction. Though most states now have plants and
animals listed as restricted and forbidden on agricultural shipments,
everything else is fair game.

There are some classic examples of bio-control gone
wrong. Despite concerns from plantation
owners as early as 1883,
Jamaican mongoose where introduced to Hawaii to control rats on the big
island. However, they preferred eggs
instead, resulting in the destruction of many native bird species and not much impact on the rats at all. Similarly,
the Australian infestation of poisonous cane toads was caused in
the early 20th century by an effort to contain a beetle attacking the sugar cane. A mere 102 of these toads were
imported. Now there are billions, and
more are spreading today into the populated regions of New South Wales.

The multi-coloured Asian lady beetle (Harmonia axyridis, also known as the Japaneese Ground Beetle) is an example of a non-native invader that has been spread around North
America without regard to the survival of the native populations, cheifly two and seven-spotted beetles. Known as voracious aphid predators since the middle-ages, these exotic beetles were first introduced
into the United States near Victorian shipping docks in the Mississippi
Delta in the late 19th century. The sturdy eighteen-spotted specimen
was heavily imported into the South-eastern US during the 70s to control aphids
on pecans, and as early as 1916 into California.

Given the severity of the problem, the beetles seemed an
elegant solution. The many aphid
species (including over 30 genera of the family Aphididae) represent billions of dollars in losses in North
America alone. They are uniquely suited
to damage plants. Not only are they
capable of asexual reproduction (clones) and live birth by the hundereds, they
feed by using needle-like mouthparts to pierce plants and suck out the juices. Some species are even herded by ants that collect the "honeydew"
waste product in exchange for protection.
Ahpid predation not only removes nutrients from the plant, but also
opens up holes for secondary infections (such as fungus) to get a
foothold. Their stylet-type mouthparts
also act as dirty needles, carrying viruses between plants.

All lady beetles are voracious aphid destroyers. People have known this since the middle-ages when a swarm of the gaily coloured beetles was considered a gift from the Virgin Mary, hence the name. They really do a good job, though far more
so while in their larval stages. Most
people wouldn’t even recognize the fearsome-looking larval stage were it not for the distinctive
red and black colouring on most. They’re
designed to eat and not be eaten – nothing more. A careful look at their mouthparts reveals the sturdy mandibles
of an unabashed carnivore.

For the last 15 years or so, adult beetles have been
collected by the trillions, to be sold online and at garden centres. Consumer surveys revealed that shoppers
prefer the familiar appearance of the rounded adults in comparison to their
spiky and lethal-looking larvae. Additionally, adults are very easily captured in the Rocky Mountains
where they collect on rock faces to warm up in the morning. Their exothermic (cold-blooded) metabolism allows them to
be shipped under refrigeration in a type of cryogenic storage.

Unfortunately, being mated adults, they’re ready to lay eggs and
are not going to be very interested in eating the aphids off your roses. It’s a scam. They fly off, give you a very bad impression of bio-control and
lay their eggs all over the place.
While this has the effect of changing the composition of beetle species
in your area, it won’t have much impact on your local aphid
population this year.

Another negative side effect of this imported lady beetle concerns
the wine industry. In places where this
insect has displaced native populations, the alkaloid-covered
shell and habit of releasing hemolymph (insect blood) when frightened is such that even a few per standard 280-gallon (1000-litre) bin will produce a
recognizable off-flavour. Desgined to be unpalatable to predators, they are proving unpalatable to Pinot Noir producers, too.

In addition to all this, non-native species that were previously
not a problem have been turning up as pests in their own right with increasing frequency. Increased international shipping and climate
change act in concert to increase the impact
of non-native plant and animal species in temperate climates. Species that once hatched at just the right
time for baby birds to eat them are now hatching earlier. The result is fewer birds and more
bugs. Much of the northerly spread of
insect pests such as the Japanese horned beetle in recent years has been a
consequence of unusually mild winters.

This is not to say bio-control isn’t effective. There are a many examples of animals keeping
pests at bay. Several insect species
have been used in concert to control
Tansy Ragwort (Senecio jacobaea L.), a plant lethal to grazing
animals, by lying eggs in the developing flower buds. Other effective insect predators include sharp shooters (Chrysoperla
spp.), parasitic wasps, dragonflies and all manner of spiders. Often the best route is to encourage a
native predator (or at least let them do what they do) if you can’t plant crops
that are pest resistant.

Modes of
action that are highly focused on a single species are generally the
safest whereas bio-control agents that parasitise or consume many different species can be trouble. Be sure and find out just how they work.

Not all bio-control is insect related, even though insects cause more economic harm than any other class of animal. Chickens are used to control all types of invertebrates. Cats can keep the rodents at bay whereas dogs are used to keep the cats and sometimes deer away. Some microorganisms are very
selective and have been used in very large scale as components of genetic
modification (such as BT corn and cotton).

If you’re considering using bio-control, it’s always best to
do your research. There are a few key
things to consider:

Taking just a little care can greatly increase the effectiveness of your biological control friends. Care for them and they’ll stick around.