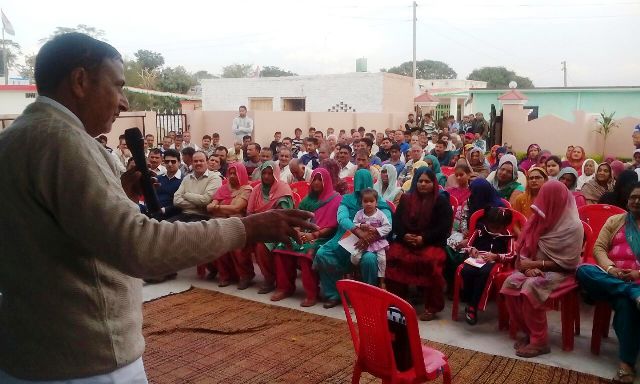 Jammu, November 29, (Scoop News)-Asking the workers to expose the divisive design of BJP who have hidden agenda of dividing the masses in the name of religion, regionalism and communal lines, Sham Sharma said BJP is a party opportunists and only incite the sentiments of innocent people which ultimately create unrest in the society. People must understand the game plan of BJP and give befitting reply in the elections.
Continuing his election campaign in Akhnoor ,Sham lal Sharma, Senior Congress Leader and Minister for PHE, Irrigation and Flood Control, seeking popular mandate on his 12 years performances said, “You assigned me 3 duties, first the Bridge on river Chenab, Degree College, Up gradation of City Girls High School.”However, with missionary zeal as claimed by him, not only fulfilled three duties but gone ahead to make Akhnoor as Model constituency while get constructed 4 Bridges on River Chenab,9 Tube Wells with Back Up System to provide adequate drinking water for next 30 years without any shortage. Old wires, Poles got replaced to ensure power supply in town, Nirdosh Chowk previously called Forward Chowk widened without dislocating small khokhawalas, City Hospital upgraded being provided best of health services which even in GMC not readily available, New face lift to Jio Potta, Chandian, Nomandhar River Chenab Ghats given, Walkers Paths, Sheds for visitors, tourists and one Tourist Reception Centre too get built; all these to make Akhnoor Town worth tourists attraction as well as local people’s comforts. Sham Sharma stated, Mini Sectt to shift all Govt offices at one place to avoid locals to move from one to other places in past, above all, he claimed ensured that safety and honor of citizens made it CRIME FREE town, where women, daughters could move anywhere without any fear. He said, he wanted DO much more since when people given him the duties even basic civic amenities were missing, which now built need continuation, as my AGENDA is DEVELOPMENT, progress and prosperity of Akhnoor in next six years too. Appealed women, youths and intellects to adjudge his performances with last 60 years, to justify his claim over their Votes, which he hopes shall cast by pushing EVM’s HAND button to steer to new heights his motherland Akhnoor. addressing a series of meeting at Bhomal Sham Sharma charged party like BJP or others talks only development and progress to be fool the voters but when Akhnoor where the development in reality could be seen during his 12 years tenure, why shut their eyes. He re-pledge that Akhnoor people will vote for him irrespective of any other reason because to make this reality vision required which translated into truth.Sham Lal Sharma urged upon women voters and youths in particular that development and progress are the main election agendas of his performances and should be compared with his predecessors whom they had rejected repeatedly but re-appears in Akhnoor to pursue sinister designed destructive politics. He stated people knows that Akhnoor made crime free city, ended exploitive politics and has been provided responsible administration “Said Akhnoor people’s political Hat tricks in this assembly elections will assure them more and more to make Akhnoor as Model Constituency emerging as an apostle of Jammu Leadership.