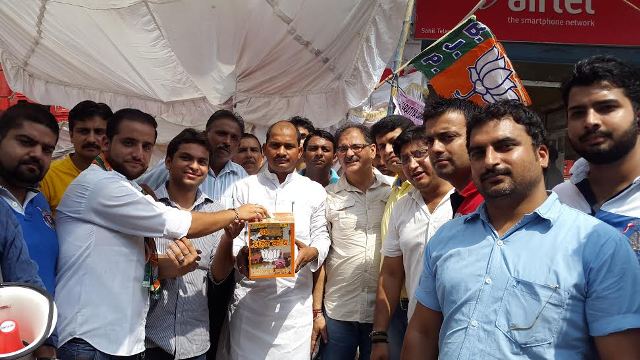 Jammu, September 19, (Scoop News)- State BJP General Secretary & Former Mayor Kavinder Gupta, alongwith BJYM State Prabhari Ashok Singh Chauhan and other leaders setup a collection counter at Talab Tillo area of Jammu West district to seek donations from the general public for the help of the people who have been affected by the recent rains and floods. They were making appeals to the people to donate for the noble cause.
Kavinder Gupta, while expressing sympathies with the families which have lost their kiths and kins and suffered heavy losses of houses, crops, livestock etc. said that being human beings and part of the society, it becomes our duty to come forward and help the suffering people whatever is possible. While relief material is being distributed among these families, the donations collected through setting collection stalls will also be utilized in providing essential commodities for survival and other basic needs. He announced that the party leaders and activists have been setting the such collection stalls in different parts of the state for reaching maximum people with and appeal to donate.
Ashok Singh Chauhan said that the Yuva Morcha activists are working in unison with the BJP in this hour of grief and sorrow and reaching the people to get their cooperation and some sort of help in the form of material and money. He said that although we cannot get the expired members of the families back but our efforts to wipe the tears of the families can provide them some relief. He said that the Union government has been providing every kind of help and the state government should distribute it in an impartial manner so that there is no complaint discrimination.
Karan Sat Sharma, Ajay Pargal, Ayodhya Gupta, Sat Pal Karlupia, Bhanu Singh Jasrotia, Lovkesh Gondhi, Rinku Chauhan, Keshav Chopra also took part in the party’s campaign of donations collection.
MORE AT http://scoopnews.in/det.aspx?q=40913