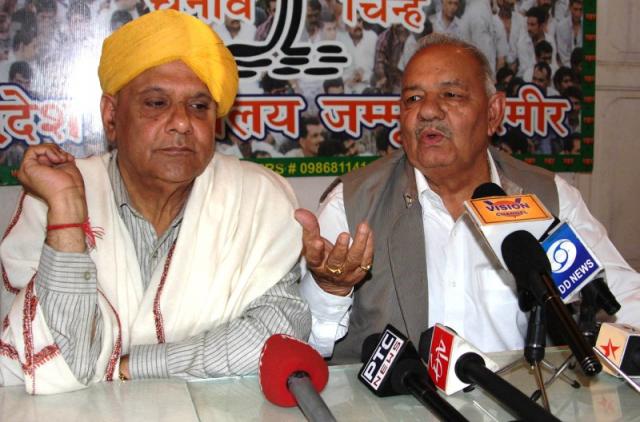 , March 11 (Scoop News) – Criticizing coalition government headed by Omar Abdullah for remaining silent on this bill, the leader of BJP legislature party Chaman Lal Gupta and former State President & Jammu East MLA  Ashok Khajuria said, “both National Conference and Congress should have not allowed the introduction of the bill in initial stage”.

BJP senior leaders while talking to reporters in Jammu, opposse the bill introduced in J&K Legislative Council  by People’s Democratic Party (PDP) pertaining to Disqualification of Permanent Residence Status in case a female resident from J&K marriage to a non-resident of state.“We express our total disagreement with the private members bill introduced in Legislative Council by PDP Legislature as it is against the spirit of the State Constitution and its preamble, which guarantees equal rights and opportunities to the women”, leaders add.

They told that the matter has been settled by the judiciary on the issue and there  is no occasion to reopen the issue, he said and condemned the role of Congress for not rejecting the bill at its inception stage.He  asked the government  to explain as to why a number of bills with National outlook were not allowed to be introduced in the assembly. He said Bill aimed at bringing down the tenure of State Assembly from 6 years to five years was not allowed to be introduced. Same was done with the bill for granting  rights to refugees as also another one meant for  protection of rights of SCs.

They also demanded Women Reservation Bill to be passed in J&K Legislature on the pattern of bill passed in Rajya Sabha. Leaders  said that we fully support the bill granting reservation to the women.
BJP is not there to play cheap power politics and will fully cooperate with the state government over the issue of giving reservation to women, they said adding we urge the government to come openly to make same type of Act in the State Legislature.
Khajuria, warned that the party will not allow the smooth proceedings of the assembly if the PDP’s bill introduced in council  is allowed for consideration.
This issue will also be raised in the parliament by BJP soon, Gupta said in reply to a question.
Both BJP leaders said that delimitation of assembly constituencies is a core issue for the party and we will continue to get justice for division  which has only 37 assembly segments despite large area and more population as against valley which has 46 assembly segments with less population and less area.