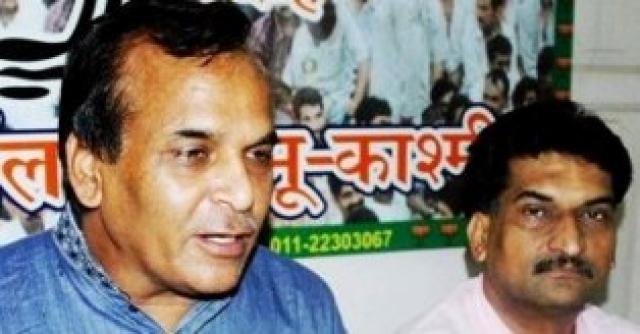 ,August 10 (Scoop News) – BJP State Spokesperson Ramesh Arora demanded immediate arrest of all anti-national elements, which are responsible for raising solgans of Azadi and Pakistan Zindabad outside the campus. They should be immediately arrested under Public Safety Act (PSA).

In a statement, Arora also demanded action against police officials present on the spot. They should be identified and in case they are found casual a callous, while handling the situation, when such slogans were raised require being booked under law.
Arora said that incident should not be taken lightly. Because it may begning of a game plan to spoil the peaceful atmosphere of region and disturb communal harmony and we should nip the evil in the bud. We cannot allow such element to operate in region and it was a delebrate attempt outside the University campus in order to provoke the nationalist youth.
A telegram in this regard was sent to Governor of Jammu & Kashmir by Ramesh Arora demanding immediate intervention and have also informed the same telephonically, demanding that the situation before takes a ugly turn be taken seriously and master mind behind such incident be also booked under PSA. It is first time such an attempt was made openly which will not be tolerated at any cost.

Meanwhile Students Scholars Joint Action Committee (SSJAC) also describes the anti and Pro Azadi slogans as a well planned conspiracy rather than an emotional reaction with a motive to create a communal division among the brotherly peace-loving and nationalist people of region. He further said that these people are unaware of the historical braveries and national spirit of Duggars which have gave their supreme sacrifices with integrity and Sovereignty for their motherland.

SSJAC leaders demanded an immediate arrest of these culprits. They termed such incidents as a results of Dilly-Dally policies of based legislatures who are much busy in pleased their Kashmiri rulers rather taking care of their people.