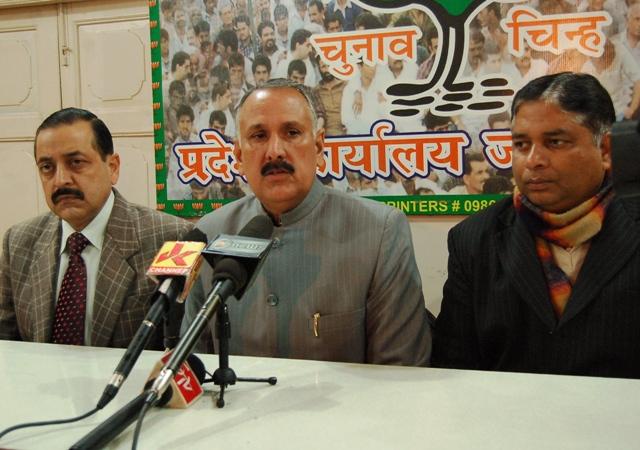 Jammu, February 14 (Scoop News) – Lashing out at the People’s Democratic Party (PDP) Chief Mehbooba Mufti and also taking the UPA government to task for its laxity, State President Shamsher Singh Manhas today expressed surprise that statements questioning the territorial integrity of India were being made with impunity and there was no action being taken against persons issuing such statements.

Manhas took serious objection to Mehbooba Mufti making objectionable statements about Indo-China border even though she was Member of the State Legislature Assembly and had taken oath under the Constitution. He said there was a clear case of sedition against Mehbooba Mufti and wondered why the Union Home Minister was saying that he was still looking into the matter even though all evidence of Mehbooba Mufti’s statement was available in form of media footings.


He also announced that BJP will hold protest demonstrations at district level on February 21 to press party’s demand for holding Panchayat election after implementing 73rd Amendment of the Indian Constitution in totto.

Reiterating party demand to implement 73rd and 74th Amendments before announcing election schedule for Panchayats and local bodies, Manhas said that the whole exercise of elections to these bodies without implementing the amendments will prove to be futile and the real motive of empowerment at grass roots level will not be fulfilled.While our party activists will come on streets to build pressure on the government to implement amendments, our MLAs will raise the issue alongwith other issues like delimitation, discrimination, use of police to torture those holding tricolour on Republic Day, unemployment, problems of refugees, agitating forest and agriculture tecnocrats physiotherapists and government employees, he added.

Manhas also announced that 3-day “Prashikshan Varg”-Training Workshop-of the party’s prominent activists will be organised at Jammu between February 25 and 27 to further acquiant the party cadre about the ideology and principles of organisation as also to educate them about their role in making BJP a strong force in this border state in order to strengthen the hands of nationalist people and boost the morale of security forces.

Filed under: Politics, World
Share Tweet Pin G Plus Email
previous article: NC for restoration of autonomy in J&K,Abrogation of Article 370 impossible:Rather
next article: Sri Lanka—400,000 Plastic Containers To Minimize The Wastage Of Fruits And Vegetables During Tra